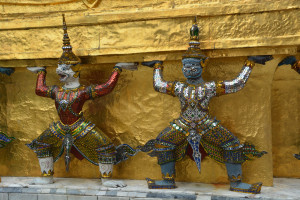 The food in Laos and Cambodia was good, but it is not by chance that the cuisine of Thailand (and that of Vietnam) are much more famous. One reason is the variety—there are simply many more thai dishes composed of many more flavors than in Lao or Cambodian food. Another reason is the over-all uniformly high quality. For example, arriving in Bangkok starving after a poorly planned day-time flight, we bought the first food we came upon after touching down. This happened to be spring-rolls at a small stand in the arrival hall. Freshly made, crunchy, with the right amount of each component, these saran-wrapped rolls were substantially better than most of the food we had consumed in the previous two weeks. Alexis declared that she could eat breakfast, lunch, and dinner at this stand for weeks and be very happy. Alas, we did not stay in the arrival hall but moved on to our hotel for the few nights we had in town. 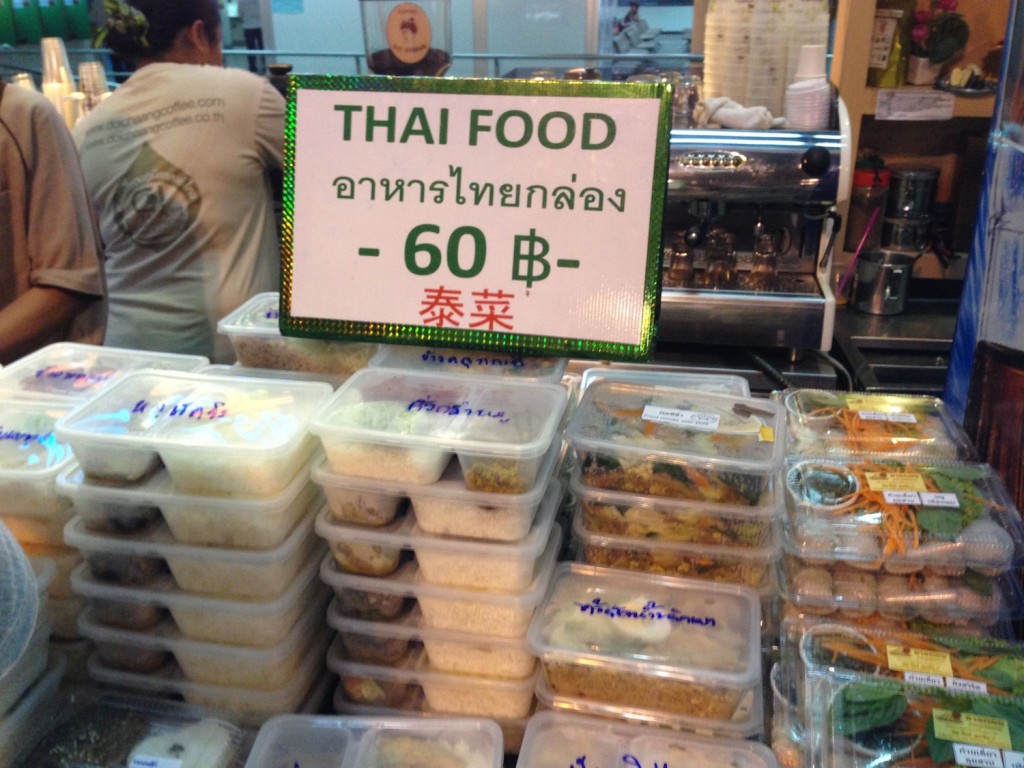 Delicacies for sale at Bangkok airport.

Bangkok is a sprawling, cosmopolitan city (some 14M people live in the Bangkok Metropolitan Region). One could spend years exploring everything the city has to offer. However, large, crowded cities are not the best when traveling with small children, and Alexis had been to Bangkok before so we decided to make this stop fairly short. We had timed our visit rather unfortunately to coincide with the anti-government protests that had been ongoing since the beginning of November. The demonstrations were confined to the areas around the government buildings in the city center, and were for the most part peaceful, but it was getting a bit nerve-wracking when the anti-government “yellow shirts” broke into several government buildings forcing parts of the government to close down. It didn’t get any better when we started hearing reports of casualties and hundreds of people injured in the clashes on the last couple of days before we were scheduled to leave Bangkok. The crisis in 2008 had shut down the airport and we were nervous that this would happen again. It was a weird feeling sitting in the taxi on our way to the airport to leave the country, wondering if the demonstrations would escalate into more violent riots or taper off quietly. One the one hand, one is much more concerned about safety when traveling with kids and all we wanted to do was to get out of there. But on the other hand, we take these type of events more seriously now that we are older and feel more empathy for the locals who do not have the option of leaving the country. I am not sure what I disagree with more: how the current government can be allowed to have Thaksin Shinawatra run the country from exile abroad through his younger sister or the undemocratic methods of the opposition. All I know is that I felt terribly bad for the cab driver and the other locals who have no choice but to live with this. During the taxi ride, I had flashbacks from our visit to Ethiopia a few years earlier that coincided with Somalia declaring war on Ethiopia. I feel insanely fortunate to be in the position I’m in, and it is almost embarrassing to have the easy option of leaving the country and getting to chose how much to care about these events.

Before the escalating demonstrations had made the city center off limits, we managed to visit the Grand Palace, which is a spectacular complex of buildings. Built in 1782, it was the residence of the Kings of Siam, and later the Kings of Thailand, until 1925 when the royal family moved to Chitralada Palace. It is still used for official ceremonies several times every year. Visually, the palace is absolutely stunning. As it has evolved rather organically over the years, with different rulers adding buildings and structures, the palace complex is an eclectic mix of different styles completely lacking symmetry or any signs of an architectural master plan. It seems that the only thing all the different kings had in common was a taste for elaborate decorations. Imagine a fairly standard (but very large) southeast asian palace or temple, but the whole thing covered in gold frosting and dipped in sprinkles and you get the picture. Understated minimalism it is not. 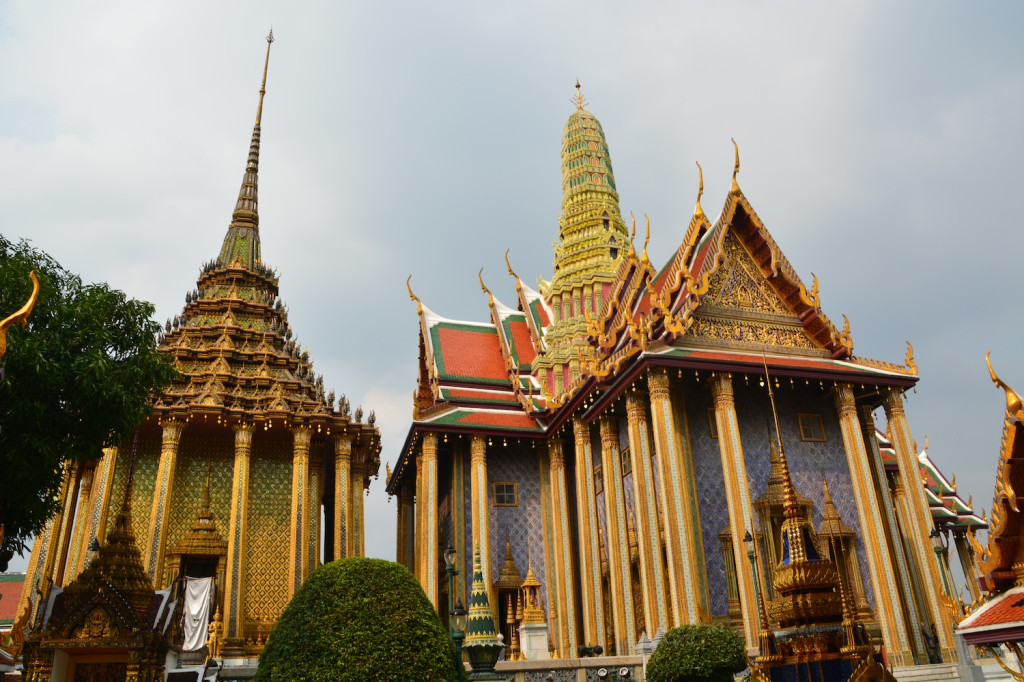 But the main reason Bangkok was more than a short layover was of course the food. Alexis suggested that to make the most use of our short time here, I should take a cooking class so that our enjoying authentic thai food could extend past when we leave Bangkok. I signed up for a one-day class at Sompong Thai Cooking School, which is a small family-run establishment. After a short, early morning subway ride I was picked up by a representative from the school and crammed into a van together with some of the other students. A quick drive through some very narrow roads and alleys took us to the school, which consisted of a couple of rooms on the ground floor of a very modest looking building, with rows of prep tables and single gas burners each topped by a wok. After a quick welcome and a briefing of the curriculum and the menu for the day, we walked over to the local market where we got to see, smell, and squeeze all the different herbs, roots, vegetables, and fruit that one is likely to use in thai cookery. We learned the difference between lime and kaffir lime, the difference between coconut milk and coconut cream (and how each is made), and how to tell which type of pepper is likely to be hotter. Upon returning to the school kitchen we got started on our first assignment, which was to make red curry paste. We meticulously chopped red chiles, shallots, garlic, galangal, lemongrass, kaffir lime rind, and then used a mortar and pestle to carefully ground it into a fine paste together with black pepper, cumin seeds, coriander seeds, coriander root, and shrimp paste. A slow and arduous task. We were told that this can easily be done in a food processor, but our instructor alluded not so subtly that no person with dignity and self-respect would ever use a modern tool to produce what is the foundation of so many different thai dishes. When the curry paste was done, we moved on to making coconut cream soup with chicken, or Tom Khaa Kai, which turned out to be much easier than I would have thought. The broth is just water and coconut cream seasoned with galangal, lemongrass, kaffir lime leaf, lime, sugar, and fish sauce. The whole dish takes less than 10 minutes to cook after assembling the necessary ingredients. It was, of course, delicious. Some of the dishes that we cooked really showed what a difference it makes to have a live instructor showing you how to do something. For example, we were showed exactly what to look for as the coconut cream based red curry bubbled, thickened and changed color so that we would add the different ingredients at exactly the right moment. The Chu Chee Curry with Prawns, which included the red curry paste that we worked so hard to produce, came out rich, deep red, creamy and perfect. We also made pomelo salad with prawns: Yum Som Aoo,. This is a savory and rather filling salad that balances sweet, salty, and sour perfectly. The semi-soft yet slightly chewy texture of the pomelo is complemented by crispy peanuts and toasted coconut. Last but not least we made the perennial favorite sweet sticky rice with mango. It was interesting to learn that the only additions to the sticky rice are sugar, salt, and reduced coconut milk—I had always thought that it included condensed milk. The result was super yummy, but in all honesty this famous dessert is only as good as the mango—the rice is merely a complement to the fruit. 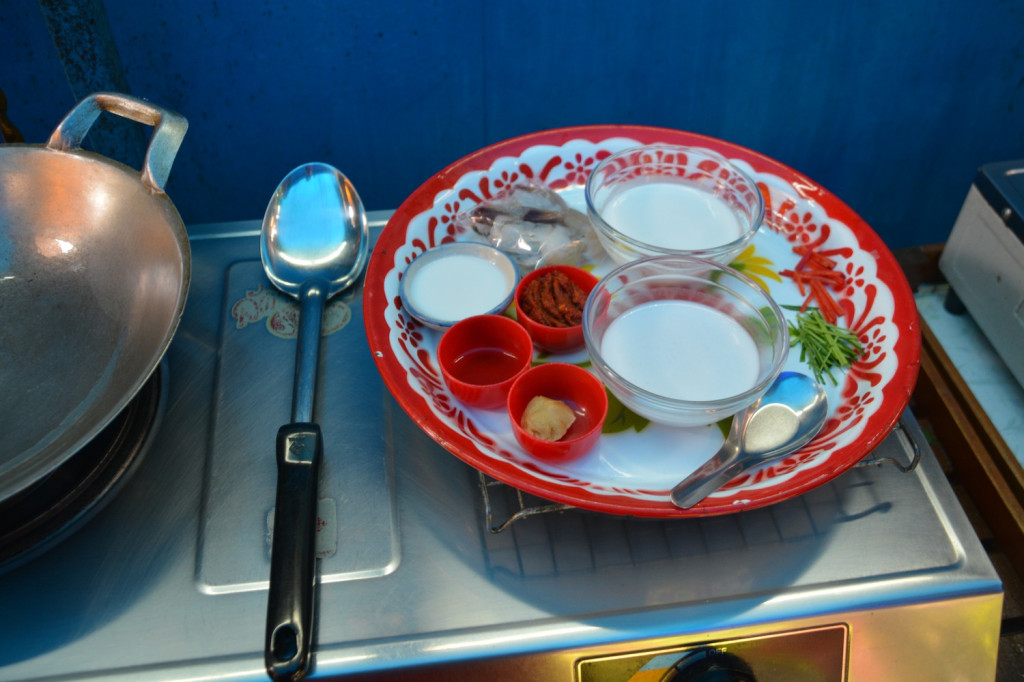 The food that one creates in a one-day cooking class is of course fairly basic, and we were eager to try a few of the many restaurants in Bangkok. The best food that we had was at a place called Tam Nan Thai. It is so unpretentious that it is easily missed. Neither upscale nor a hole in the wall, it is a little too mid-range boring to appear on a foodie’s radar. The interior looks like a generic Chinese restaurant in the US; it is hidden under a multiple-level shopping mall. You wouldn’t go there unless someone recommends it to you. But the food at this place was absolutely to die for. We kept ordering more than we could possibly eat because we simply wanted to try as many dishes as possible. Crispy rice cakes came with a dipping sauce made from, among other things, minced pork. Odd, unexpected, and very tasty. We had a lovely chicken fried to crispy perfection, served with a fiercely spicy papaya salad and sticky rice. A very interesting dish was the crispy tofu and peanuts with spicy and sour mango salad. I have no idea how they created that texture of the crispy tofu (they also had a version with fish in it that would have been even more difficult to guess what it was had you had it blind). It was like the most savory deep-fried breadcrumbs that melted in your mouth, perfectly complemented by the spicy mango salad with the classic lime-sugar-fish sauce dressing. We had too many different delicacies to describe here, but the best dish had to be the braised tofu in red curry. The tofu was perfectly cooked: a paper-thin layer of crispy exterior covering a silky smooth interior, draped in the most delicious red curry sauce. It was remarkable how the tofu stayed crisp, even towards the end of the meal when it had been sitting in the sauce for some 20 minutes it wasn’t the slightest bit soggy. The meals (yes, we went here more than once) that we had at Tam Nan Thai will be one of those food memories that stay with us forever. Like the Lebanese food at Sunnin in Los Angeles, or the one time we dined at the French Laundry in Napa Valley, the thai food at Tam Nan Thai is now the gold standard to which all other thai food will be compared. 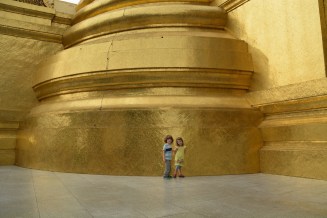 Phineas and Eilir at the Grand Palace

Shopping for meat at the market 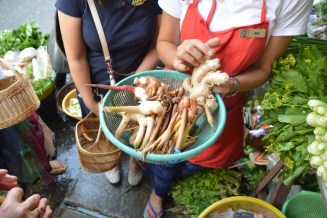 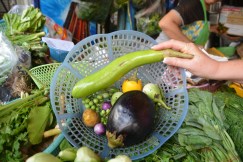 Eggplant comes in all shapes and sizes. The really small ones are really good! 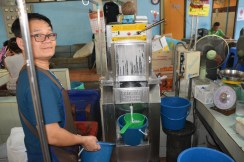 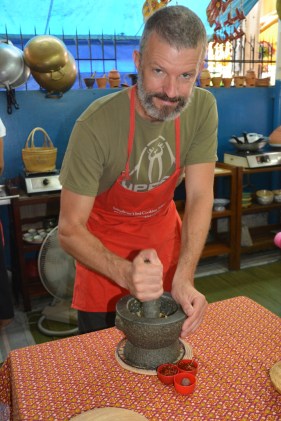 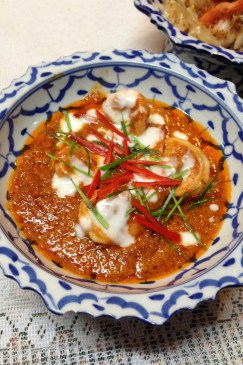 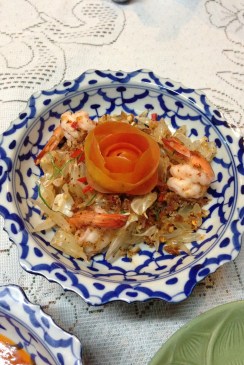 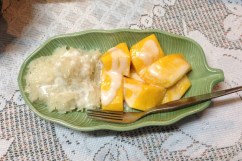 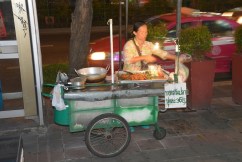 One of thousands of street food vendors in Bangkok 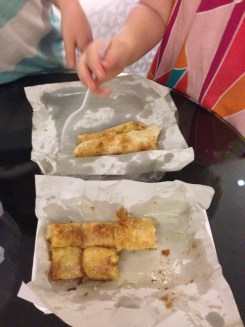 Sweet, sticky, syrupy banana pancake on the streets of Bangkok 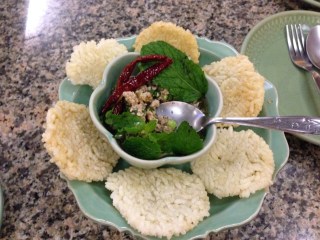 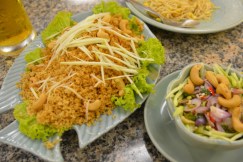 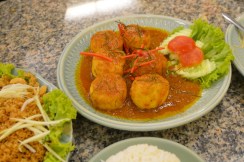 One of the best thai dishes i’ve had: braised tofu in red curry at Tam Nan Thai
Tags: bangkok, food, thai food
From: food, travel
← The Velveteen Rabbit in the Killing Fields
Downtime in Bali →