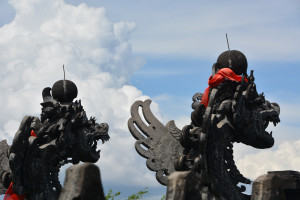 Bali is our vacation from our vacation. I was worried at first that a month on this small island could drive me insane, given that both Staffan and I have spent ample time here in the past and it should be obvious by now that we like to keep moving. But it is working out better than I could have imagined. We are staying mainly in villas with private pools, carefully selected based on proximity to renown surf spots. We also ventured out of our comfort zone of small, boutique properties and spent five nights at the Westin Resort in Nusa Dua, on the east coast of the southern peninsula. Our SPG points came in handy for that one, and will work wonders to decrease our average nightly spend, which we meticulously track and graph. Resorts are normally not our style, but this stay had definite perks. For one, it had a kids club that Phineas and Eilir adored, complete with a trampoline and a climbing wall, and all sorts of arts and crafts. Next, it boasts the best gym we’ve had on the trip, and we could actually overuse it, thanks to the kids club. There was a reef right out front of the hotel with schools of tropical fish, a water slide into the gigantic pool, and multiple surf spots within walking distance. Finally, it offered an afternoon high tea with crumpets, complimentary for our room. I wince to admit it, but we were in paradise.

The beach out front of the Westin, Nusa Dua. The kids made kites in kids club, the reef is right out front. Paradise in the unexpected.

Spending 24-7 with a 4 and a 5 year old takes endurance, patience, and at times, mental restraint. I can without a doubt state that these months have been incredibly rewarding, if also frustrating and exhausting. Just being a part of their daily lives, sharing in their everyday joys and discoveries, has been a gift. Who knew I could learn so much about autobots and deceptacons, or that Phineas could display such physical excitement at explaining their powers? Staffan is an aficionado of the Winx fairies, their powers spanning from amateur harmonix to underwater sirenix to cutting edge bloomix. Phineas and Eilir speak mainly in English, but with choice Swedish words thrown in for flavor. Lucky for me, their bouts of boisterous toilet talk all occur in Swedish. We take in a daily surprise of articulate, mind-bending questions posed out of their innocent curiosity, and cautious, probing ones that underscore how well they are listening even when we think they are otherwise occupied. We are teaching them both to read, and have made great progress with the slower pace of travel the past few weeks. I have carefully designed flash cards to build and re-arrange sentences. Staffan has developed some visual math games with legos. Their favorite subject remains marine life, with geography a close second. Both are good signs for our future travels, if our interests remain aligned. 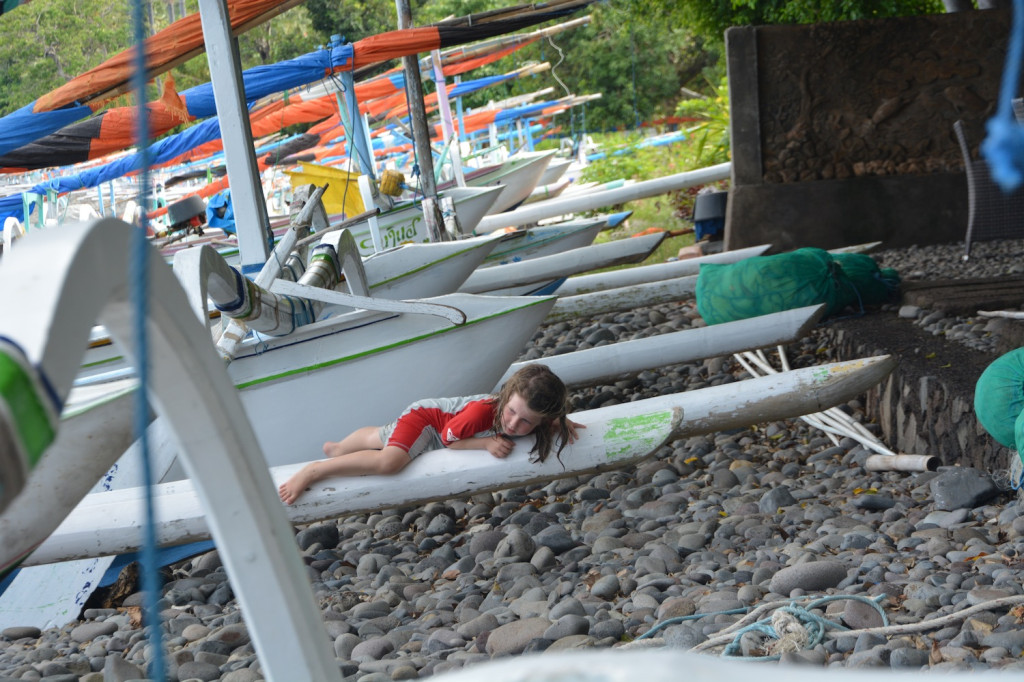 The fishing village of Amed is a nook of a town, nestled in a small strip between some steep hills and the pebbled beach. Each morning, we saw sunrise from our hilltop abode, and saw hundreds of pontoon fishing boats lining the horizon, all back by 7AM.

Flippers down, the best part of Bali so far has been snorkeling with the kids. The water on the East and North coasts are crystal clear and relatively calm, given the fantastic surf that awaits outside the reef. Both kids surprised us with their intrepid skills, swimming independently for hours at a time in the open ocean, deep diving to reach the coral reef or take a closer look at the Japanese shipwreck. I guess Phineas always surprises me in this way: his timid nature belies a thrill-seeking spirit that emerges when skiing or attempting anything involving speed. Eilir is just a fish. Her actions are driven with an innate confidence, yet I was still surprised to see her pressing deeper, stretching to touch foreign looking plant matter in search of Nemo. We drove the circumference of the island, stopping for a couple of nights in the fishing village of Amed, and pressing on along the North coast until we could see Java across the water. Since it was the rainy season and not yet Christmas, we had the hotels all to ourselves. The highlight of snorkeling was out at the dive sites surrounding the island of Pulau Menjangan. We took a day trip from Pemuteran, and were treated to multiple sightings of flying fish (they can fly for a hundred meters at a time, skimming the surface of the ocean), schools of barracuda-like translucent long fish, moray eels and some ridiculous looking puffer fish, along with the kaleidescope of other fish feeding and spawning in the shallows. The coral reef wall was particularly fascinating to Staffan and me as the drop off is immediate, from a few meters to 30m, and with it even the temperature of the water near the surface seems to drop 10 degrees within a meter of the cliff. We could see all the way to the bottom where the divers were exploring, releasing silvery bubbles to the surface.

Alexis preparing for her first ever dive in Amed, on the eastern coast of Bali. It is not without some anxiety…

Staffan and I both tried SCUBA diving for the first time.  I was instantly hooked.  It was like sinking into a wonderful peace. We saw octopuses, blue spotted ribbon tail rays, and thousands of vibrant fish. Finally resolving the pygmy head-butting sea horses from their coral home affirmed the magnificence of evolution. I have never before seen such a perfect camouflage- coral colored with white raised polka dots. It was only upon a family viewing of The Blue Planet series a few nights later that we learned that some single Indonesian reefs are home to as many species of fish as the entire Caribbean. So we’ve been spoiled.

Visiting a temple outside Permuteran. All was well until the monkeys became fiercely protective of a stairwell down to the rocky beach.

The pace of local life on Bali is tropical: people wake in the pre-dawn hours to go to the markets, fish, and worship.  By mid-day, a break from the heat is taken, before activity starts up again in the late afternoon.  We fell easily into this relaxed rhythm, and found ourselves less bothered by the heat.  We returned back to the southern end of the island through the terraced rice paddies that line the mountainous interior, stopping at many temples along the way.  Rural Bali is a pleasure to explore, as is it relatively easy to navigate given the circumference ocean roads and the north-south connecting paths.  To say the south is congested would be a massive understatement.  Driving in a van or car sets one back an hour to travel a few kilometers, as compared with the motorbikes that speed along the center of the roads or up on the sidewalks.  We ended up returning our car in favor of a motorbike for errands and early morning surf sessions, as well as some low speed joyrides for the kids.

Eilir on her surf equipped motor bike, pleased as punch.

Now we move on to our Christmas present to each other: 2 weeks in a beautiful and spacious villa in Canggu. Set amid rice fields but within walking distance to Pererenan and Echo beaches, this area of Bali is rapidly developing but still retains a quiet atmosphere and charm. In the early 2000s, Kuta ran into Seminyak, and Seminyak now seeps into Canggu.  Seminyak is chock full of trendy and fabulous cafes, boutique shops, and nightclubs, all of which we are foregoing to find a cozy spot for the kids feel at least a little like home here for Christmas.  When Staffan used to surf here 15 years ago, Canggu was just rice fields, ne’er a villa to be seen. To get in the Christmas spirit, we gave the kids cart blanche to choose a tree and decorations. Not only do we now have rainbow lights, but they can be made to blink in time with eerie 20-second sections of familiar christmas melodies, amplified by 30cent speaker technology. The result is a glittery mess of a tree that makes me smile knowing this is the one and only time they will be afforded such freedom to assault our senses. As the kids danced around the tree, hanging ornaments clustered around their reaches, they swooned, proclaiming how absolutely beautiful it is. All our paper figures from Sri Lanka made it on to the tree as well, lending even more color and a superhero theme.  We’ll see how Santa handles our “must fit in our already stuffed 3 roller bags” constraint placed on Christmas presents on this tropical isle. 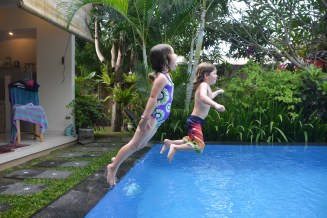 At our first private villa, the kids spent entire days in the pool.

The beach out front of the Westin, Nusa Dua. The kids made kites in kids club, the reef is right out front. Paradise in the unexpected.

ON a walk to a small rocky outcrop along the beach

Riding bikes in the resort 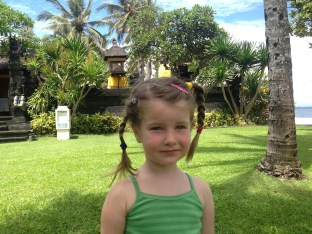 Eilir in front of a temple 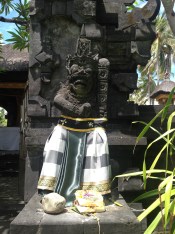 Offerings to the gods, complete with cigarettes

Eilir on her surf equipped motor bike, pleased as punch. 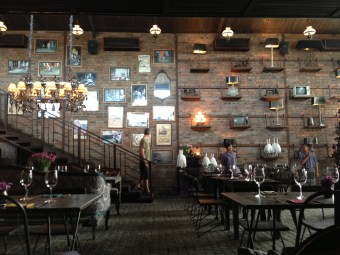 A well designed cafe in Seminyak 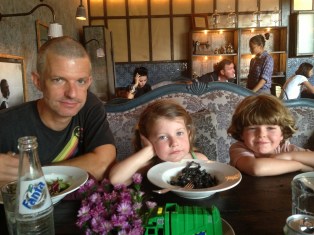 Sunrise in Amed. The spots on the water are the fishing pontoons.

The rocky beach in Amed reminds us of Oland! Hours of fun throwing the stones in!

Phineas spacing out after hours snorkeling 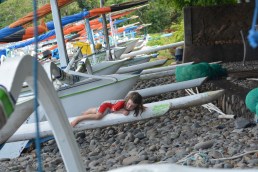 The fishing village of Amed is a nook of a town, nestled in a small strip between some steep hills and the pebbled beach. Each morning, we saw sunrise from our hilltop abode, and saw hundreds of pontoon fishing boats lining the horizon, all back by 7AM. 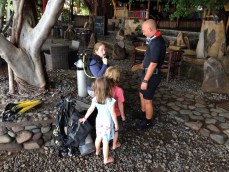 Alexis preparing for her first ever dive in Amed, on the eastern coast of Bali. It is not without some fear…

Our hotel pool in Permuteran. A manmade reef is in front that uses electric current to stimulate coral growth.

A shot of the beautiful Balinese woodwork on the doors of our villa, kids lunging on the daybed. 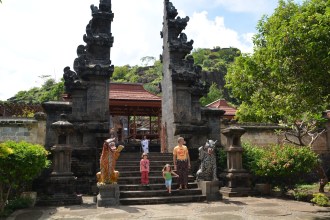 Visiting a temple outside Permuteran. All was well until the monkeys became fiercely protective of a stairwell down to the rocky beach.

She said it was a flying fish. How can a fish fly? Is it s a fish then? The debate continues for the 45 minute ride to the island.

Snorkeling: Eilir would use the floatie for rest stops

Natural waterfalls adorn the cliffs of the Canggu beaches. All black sand.

P&E climbing to the waterfall

A rainy day in the rice fields 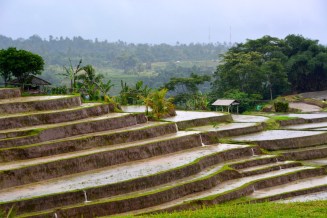 A cafe in Ubud, famous for Eat, Pray, Love. 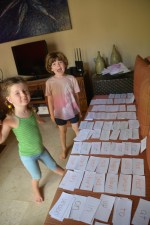 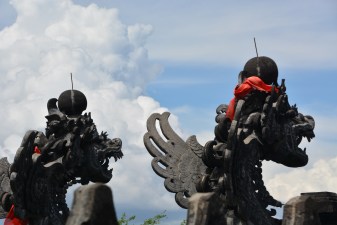