The Coolest Little Cities in the World 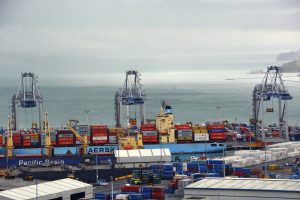 We lucked out. Unit 27b, ours for 4 nights, was a corner flat with floor to ceiling windows offering commanding views of the Auckland harbor. Set at a latitude of 37degrees South, the sun casts a low light across the water, creating an ethereal feel as thunder storms moved swiftly in and out, alternating with vibrant blue skies. I’ve always been fond of the Star Wars imagery evoked from gigantic container moving cranes that hang over deep harbor waters, coming to life like futuristic creatures. Our views in Auckland were entrancing, given the silhouette of Rangitoto, an ominous volcano, across the bay to contrast with the brightly painted shipping containers. For anyone who has ever played harbor master on the iPad, or is a die hard fan of The Wire as I am, it only gets better from here. Our hotel had a prime position, situated only blocks away from a Toyota logistics center that drew me (and Phineas) in for long spells. We watched as the massive cargo ships arrived, the docksmen boarding the ships with what we imagined to be RFID inventory readers, and proceeded to unload Prius after Prius, followed by the more exciting excavators and custom machinery. The cars and construction vehicles were directed down the ramp and parked in neat little rows on the wharf. Within hours, auto-transport trucks were lined up, engines idling as they waited to pick up their inventories and the cycle continued. As for the other bays, it was possible to spot an incoming cargo ship about an hour out, and speculate which bay it would pull into to have its containers offloaded and brought through customs. What wares lay within was left to our vivid imaginations.

Our view of the Toyota loading bay in Auckland

Auckland the city is set on 50 dormant volcanos which creates an interesting, walkable city-scape, full of hills and vistas, opening its bay to the Pacific on the east, and to the Tasman Sea on the west coast, a mere 16km walk away. The Hauraki Gulf is dotted with hilly islands, some adorned with vineyards on their slopes and quaint towns hugging their beaches, others constituted mainly of “predator free” protected nature reserves in an effort to save the endemic species of kiwis, tiekes, tuataras (a prehistoric lizard), to name a few. Evidence of Maori Pa sites (terraced, fortified villages) are carved into the volcanic hills and can be seen throughout the region. Although not its capital, Auckland is New Zealand’s largest city, with 1.4 million residents, comprising a third of the population (a full ¾ of the population lives on the North Island). Surprise, surprise, we checked out the new modern wing of the Auckland Art Gallery where Phineas and Eilir played with a super-sized version of Tinker Toys. In our walking explorations, we ate at a fancy hot dog shack where I had the best garden burger of my life, and found a wonderful Israeli restaurant called Ima, where we devoured falafels and tasty salads to the tune of some local Pinot Noir. It was a great introduction to New Zealand before we headed to the airport to catch a flight to Christchurch on the South Island. 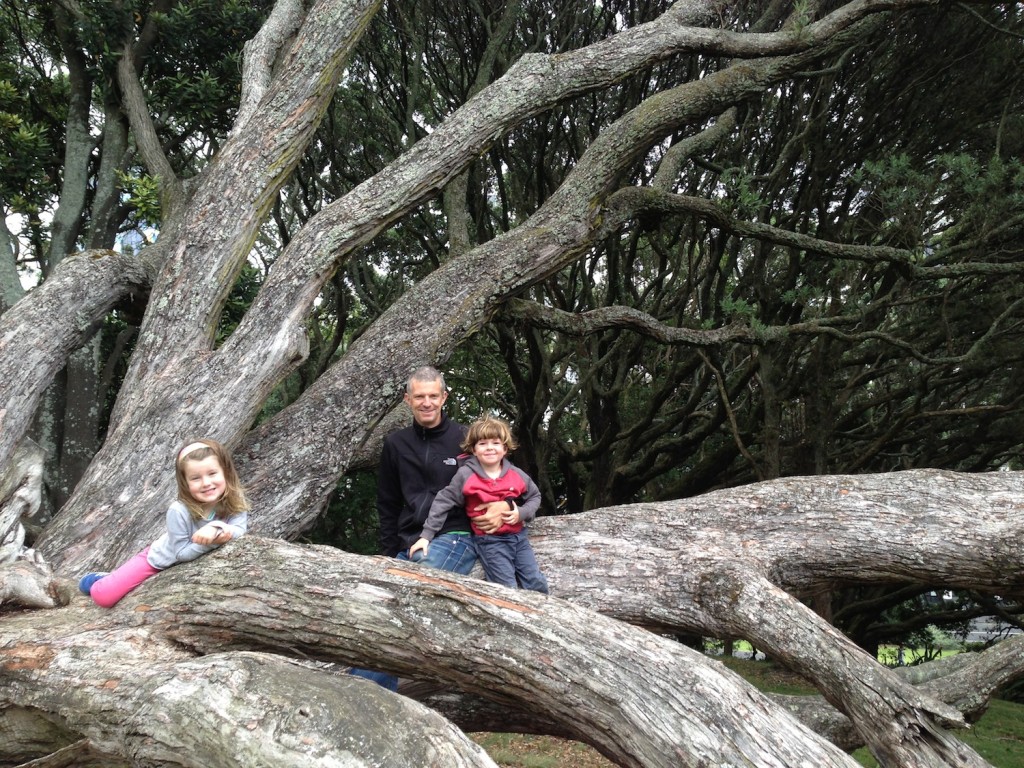 Playing in a park full of climbing trees in Auckland

Christchurch is a city still wounded from the devastating earthquakes of 2010/2011. The entire downtown is roped off, buildings abandoned with all the signs of their former livelihoods—chalkboard menus leaned up on the insides of glass doors, yoga class schedules taped up on windows, and the like. The initial earthquake was at 4:35AM on September 4, 2010 and registered 7.1 on the Richter scale. Due to the early hour of the quake, and the epicenter being 40km west of the city, there were luckily no fatalities. A second quake, measuring 6.3 in magnitude but only 10km from the city center occurred at 12:51PM on Feb 22, 2011. It is reported that the second quake was only 5km beneath the surface, and had the largest upward movement ever recorded, with residents and objects lurching vertically into the air. The spire of the Christchurch cathedral collapsed, as well as most of the structural damage to the city, and 185 lives were lost. The residents are still massively displaced, businesses shut down, and the cost to repair the city estimated at $24B, allegedly the third most costly natural disaster in history. Although tragic, it is now being turned around to present an interesting opportunity to rebuild an entire city, making it state of the art in every way. Architectural and urban plans are posted throughout the city, outlining the future. A temporary city heart has been built while the plans take effect. It is called Re:START village and is an entire community built with shipping containers. We wandered through, treating ourselves to food stands to suit our individual palates, design stores, and browsing through an independent book store. This is definitely a city to which we will return to check out contemporary urban planning and design on a living scale.

Walking out of Re:START village, Christchurch

Perhaps the coolest part of the day was when we happened upon the annual World Festival of Busking (street performance art). We watched a few acts before Staffan was chosen at random from the large crowd to act as an assistant on stage. It turned out the role was quite involved and had Staffan twirling himself around, and actually lifting and spotting the wirewalker for the entire act. Phineas and Eilir were popping out of their skins with pride and excitement. Phineas could barely contain himself, darting back and forth between me and the stage. Coming back to me he blurted out, “Can you believe it is Pappa up there? And that I AM HIS SON?” I don’t think this was Staffan’s 15 minutes of fame, but it will remain with Phineas forever. 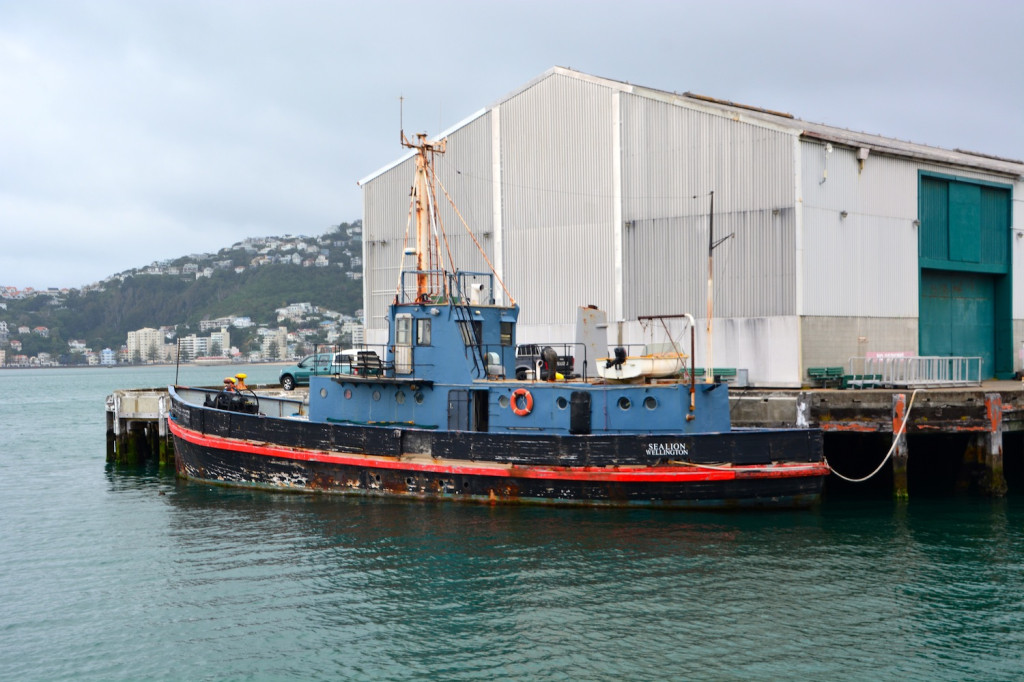 After touring the South Island, we took our campervan on the Interislander ferry over to the North Island. Wellington was our first stop, which, according to Lonely Planet, is “the world’s coolest little capital”. After parking our campervan for the night right downtown at the waterfront and exploring her harbor, coffee shops, and eateries, we enthusiastically concur. We wandered through the city, peering in at the restaurants to take in the modern décor, and perusing the menus with an eye for innovation and flair. We had fantastic luck down a side street off the main drag, Cuba St, where we found Duke Carvell’s, a tapas bar with a Mediterranean twist. Phineas and Eilir met their challenge of trying 5 new flavors each in this very adult setting, earning a desert, and a fantastic evening was had. Although sleeping in a parking lot in the middle of a city felt weird at first, it turned out to be one of our favorite sites on our entire route. For the first time in weeks Staffan and I could have a nice meal out with a bottle of local wine and not have to worry about driving down gravel paths by moonlight and mitigating the forest for the loo. 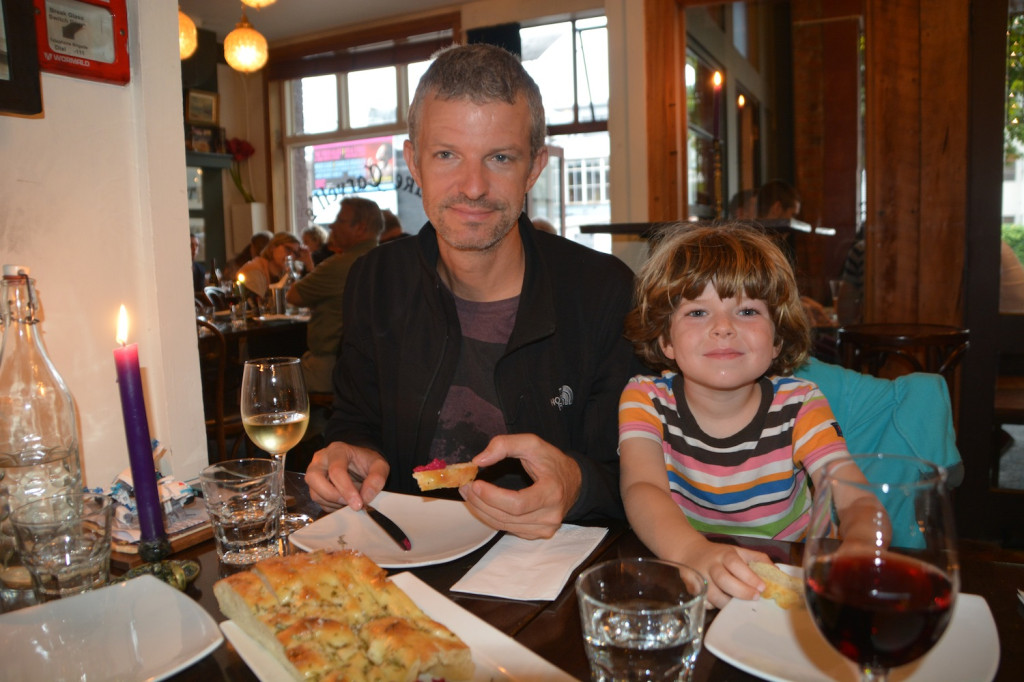 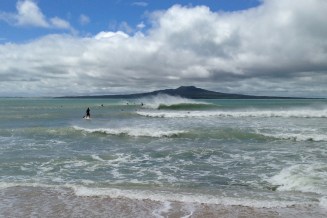 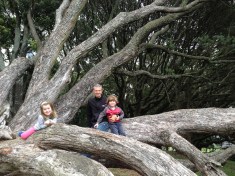 Playing in a park full of climbing trees 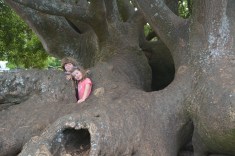 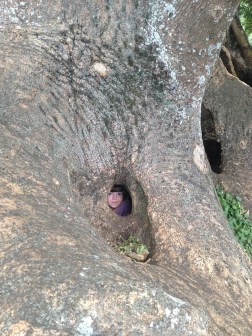 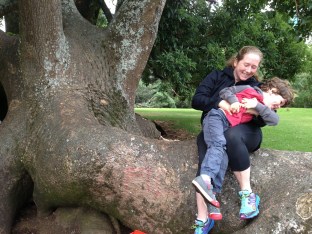 The tickle monster is never far away 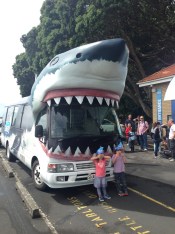 The most dangerous bus ride in the world 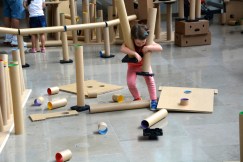 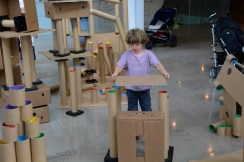 Building a fort to hide from Eilir 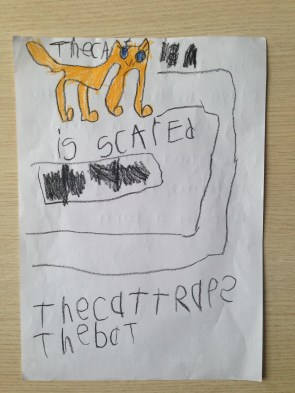 Walking out of Re:START village, Christchurch

The boat in our front yard of the motor park 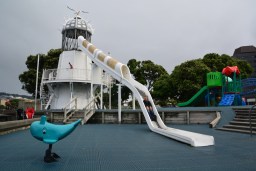 Our version of Luge for campervan olympics 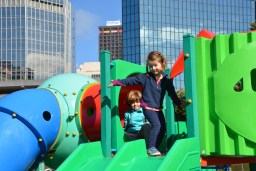 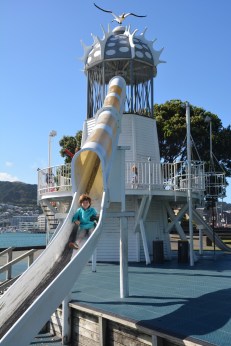 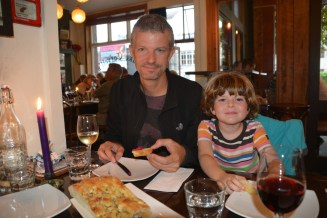 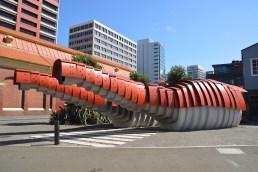 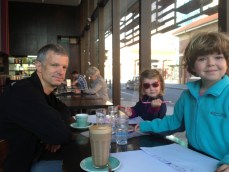 Cherishing a brekkie out- after today, it’s back to the van
Tags: auckland, christchurch, new zealand, travel with children, wellington
From: travel
← The Landscape of Childhood
From Alpine to Ocean: Arthur’s Pass to Kaikoura →