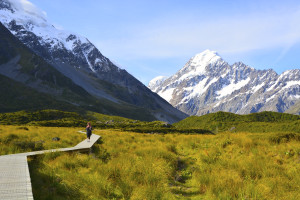 New Zealand is a land of inescapable beauty, where nature reigns supreme and darwinian concepts are constantly at play. From the ancient glaciers and soaring rocky peaks of the South Island to the rugged coastline, geothermal lakes, and volcanos of the North Island, New Zealand is a fitting end to our around the world adventure. I should also mention that it grows and serves up world class Sauvignon Blancs and Pinot Noirs that are on the rise on the world wine scene. Staffan and I have both wanted to visit here for years, but held off doing so until we had children, given its relative ease for travel. 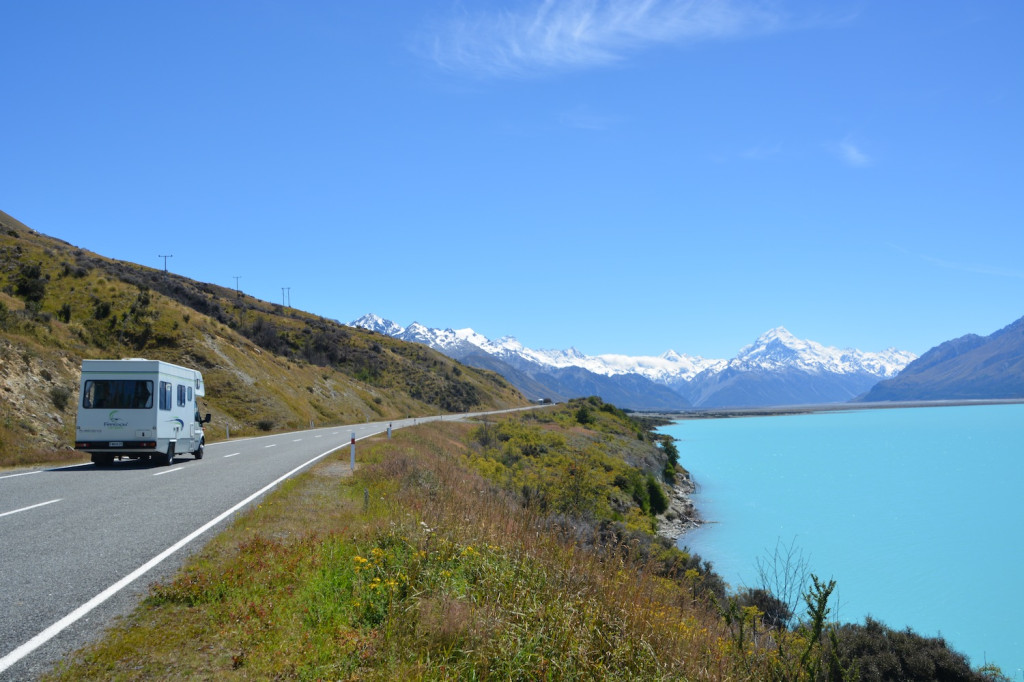 Phineas and Eilir could not have been more excited to pick up our campervan, referring to it lovingly as our House-car and serving as our Gotel. Since we could not plan in advance, we ended up with little choice among the leftovers from the peak of New Zealand’s touring season. It was a beast of a campervan: a 13 year old, 5 berth diesel with 350,000km on the dash, bearing the signs of significant wear and tear both inside and out. With the exception of a few highly memorable Transvan adventures at the Ozone in Santa Barbara, neither Staffan or I have ever taken the wheel in a motorhome, always preferring backpacking and tented camping to the caravan style. That said, hiring a campervan in New Zealand is somewhat of a must-do life experience, so we were both excited but a tad anxious to give it a try. 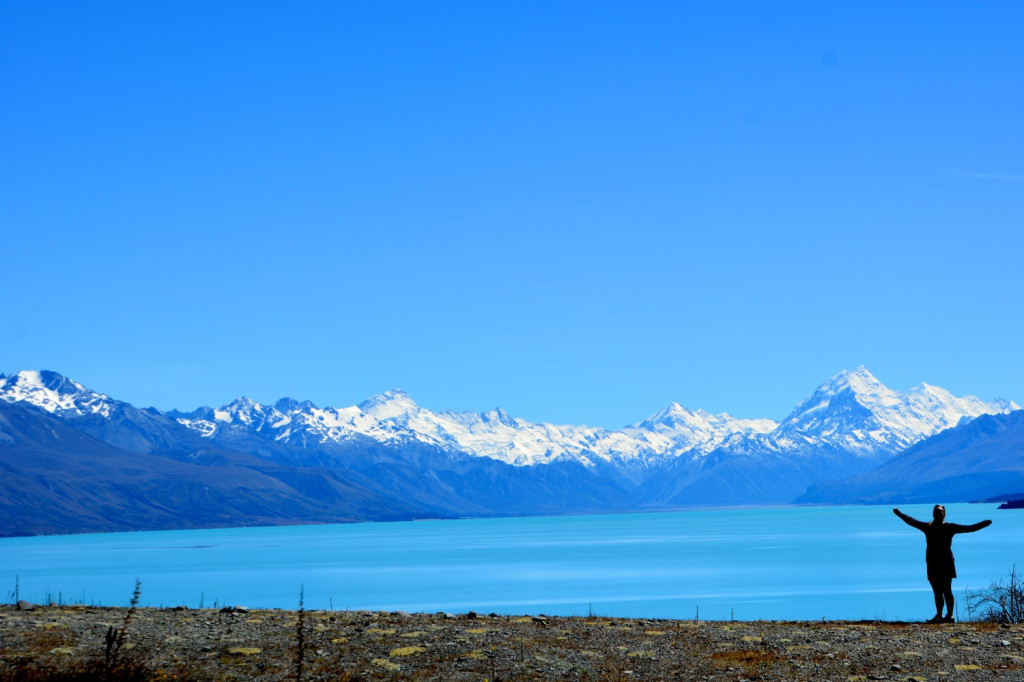 Alexis exuberant at the feeling of freedom

Our first campervan broke down within 2 hours of hiring it: a gear box issue. After returning the squealing van to Freedom Campers and getting re-settled in a new (still old) one, we embarked on a month long journey into the wilderness of New Zealand. Our first stop was at Lake Tekapu in the Aoraki / Mt Cook region. It was the first of hundreds of ridiculously blue lakes and rivers we would be mesmerized by while on the South Island. Due to our late start, we rolled into camp at 9:30PM, but it was still light enough outside to play on the playground and walk along the shore of the lake. The next morning, at Phineas’ request, we braved the crisp alpine waters for a swim. Although bone-chillingly cold, it was a perfect start to the day.

The opening scene to the Hooker Valley walk

Feeling refreshed, and with steaming instant coffees in our mugs, we continued the drive towards Aoraki (the Maori name for Mt. Cook), the tallest mountain in Australasia at 3755m/12,311ft. Staffan was an incredibly good sport along the drive as I needed to stop at virtually every turn-out or roadside wide enough for our van to get out and take in the views. I just could not believe the color of the water: I had never seen such a blue occur in nature. We followed Lake Pukaki until we reached the Department of Conservation rustic campsite at the base of Hooker Valley. Rocky mountains dominated the campsite with blankets of snow that clung to the sheer rock faces. The hike that we took that afternoon will surely remain in my memory as one of the most beautiful day hikes of my life. We had clear blue skies with little fluffy clouds and perfect, cool hiking weather. The meadows were full of tall straw-colored grass with wildflowers adding patches of vibrant color. We traversed 3 suspension bridges, crossed grey glacier streams, and tread upon many wooden walkways up the valley as the trail slowly opened up to views of Mt. Cook. A last push to the end of the hike revealed the massive Hooker glacier and a lake strewn with icebergs that had calved from the glacier’s face. It was impossible for the kids to conceive of the magnitude of the glacier, or of the massive icebergs, but they were excited by the bits of ice floating towards the lake’s edge, happily collecting and breaking them to bits. 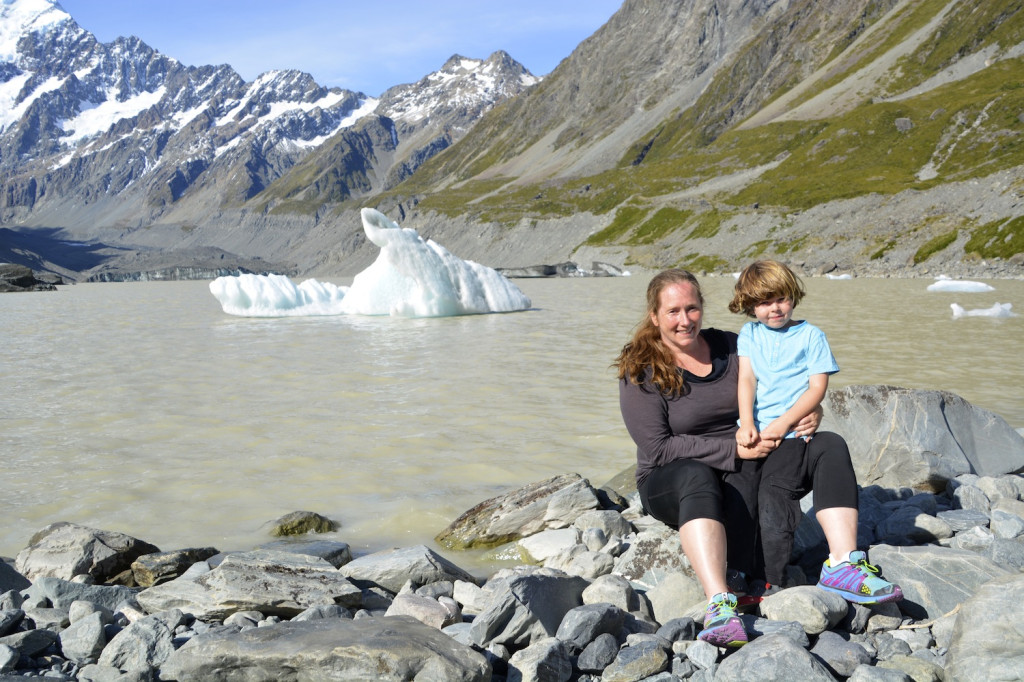 Here at the lake we sat, talking with an older New Zealand couple who make this trip every other year from their home on the North Island. They raved about the clear skies and the amazing weather and views—better than any they’d seen in the 20 years they had been making this tour. On the walk back down the valley, I explained to Phineas and Eilir about the global warming and its effect on the glaciers receding and disappearing, and they seemed to understand how special it is for them to have seen and touched this one. They did an amazing job, hiking for almost 4 hours all on their own before giving in to fatigue and requesting to be carried. We couldn’t blame them—it was already 8:30PM! The day had slipped into night and caught us unaware with the slowly setting sun. Happy and exhausted, we walked silently back to camp, hungry for Staffan’s gourmet campervan cafe.

Wish this were our hut for the night… 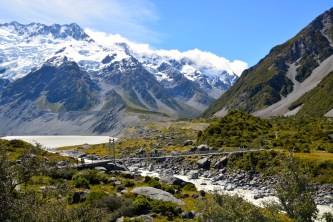 Our first suspension bridge in the valley

P&E taking a break on the way up, hoping that it is not a 6 day hike

S&E bringing up the rear. Phineas, convinced he would be able to build a snowman, is our pace setter.

Contemplating where this valley will lead us. 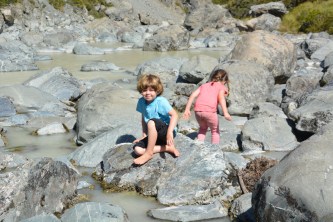 Another break by the glacial stream. Cool enough to freeze your toes.

A rare family shot taken by a fellow tramper

Almost over the last ridge

Victory! But this took a lot longer than expected and the kids are hungry… 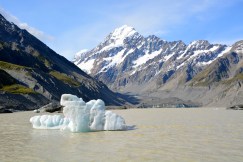 Icebergs! The Glacier is off in the distance: one can see the rock erosion where the glacier used to reach 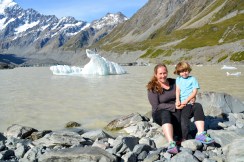 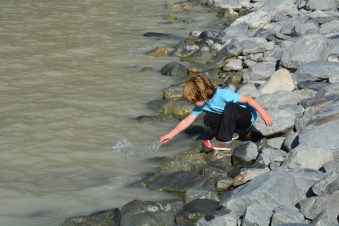 A close-up. The lake and rivers grey because of the particulates from the glacier.

Wish this were our hut for the night…

Day 2 after a hike up to Tasman glacier lake 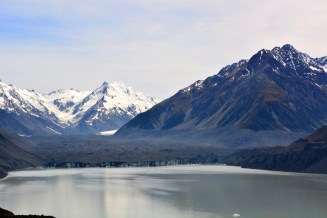 Another shot of glacial recession: the mark of where it used to stand is clearly visible as a wall of gravel-grey on the mountain 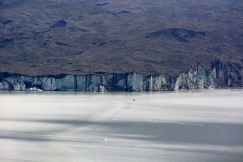 A 20 passenger boat in the picture for scale 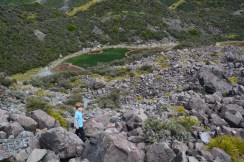 Phineas descending to the emerald lakes
Tags: aoraki, campervan, mt. cook, new zealand
From: kids, Scenic, travel
← The Twelve Apostles and a Plague of Flies
The Fox and the Snowman →
2 Comments