The Fox and the Snowman 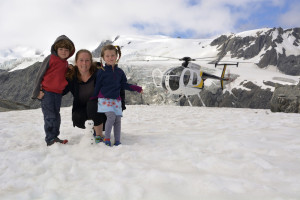 All of us were a little surprised by the dirty appearance of the glaciers in the Mt. Cook region. It was only later that we learned that the extremely high rate of glacier melt and recession had exposed layers upon layers of rock that gave the glaciers their dark appearance. In fact, we learned that the lakes at the base of the glaciers appeared only 30 years ago, an effect of global warming. We were looking forward to New Zealand’s well known glaciers, Fox and Franz Josef, that stretch down the back of the Aoraki range to meet the Tasman Sea, which we had heard were both snow white and ice blue. After failing to provide Phineas with a snowball fight at the Tasman or Hooker glaciers, we planned to splurge and surprise the kids with a helicopter tour to the top of Fox and Franz Josef, snow landings and all. 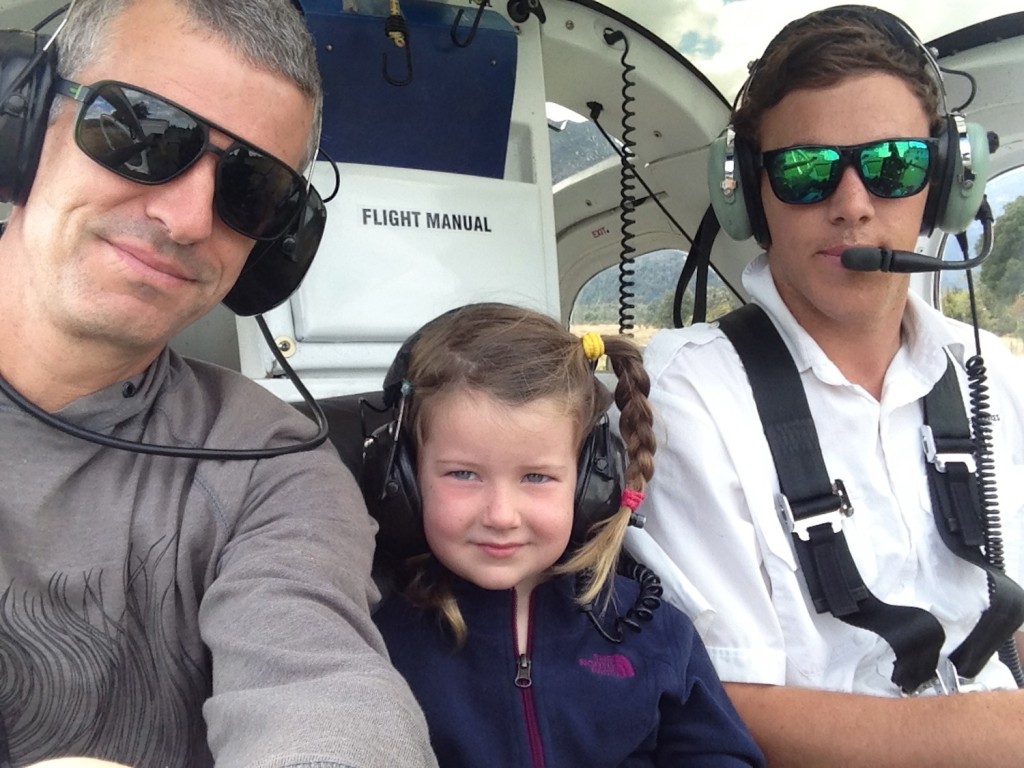 Eilir and Staffan took the front seat next to the pilot up to the glacier. Both kids were uncharacteristically silent as they placed their headphones on and buckled in. Although the sound of the propeller was deafening, it was the most silence we’ve had in a long time. The flight up to the Fox glacier was stark and beautiful. The helicopter cut a close line next to the sheer cliffs that run up through the valley, creating a dramatic effect as the glacier came into view. I was stunned by its overall size, a river frozen in time, with deep, dangerous crevasses and brilliant blue pools on its surface. We flew up to Mt. Cook, encircling its summit, and down another valley to view the Franz Josef glacier, even more pure in color. Our landing was in a snowy basin at the top of the range, the size of a city in a blanket of snow. The kids were absolutely thrilled to be out in the snow, hurling snowballs crafted with their bare hands, and setting out to make our first and only snowman of the season. Staffan and I were both taking in the landscape, trying to get a sense for its scale. We switched seats for the flight back down , and once again, both kids were absolutely silent, either scared to death in the helicopter or simply mesmerized by the experience, probably a little of both. 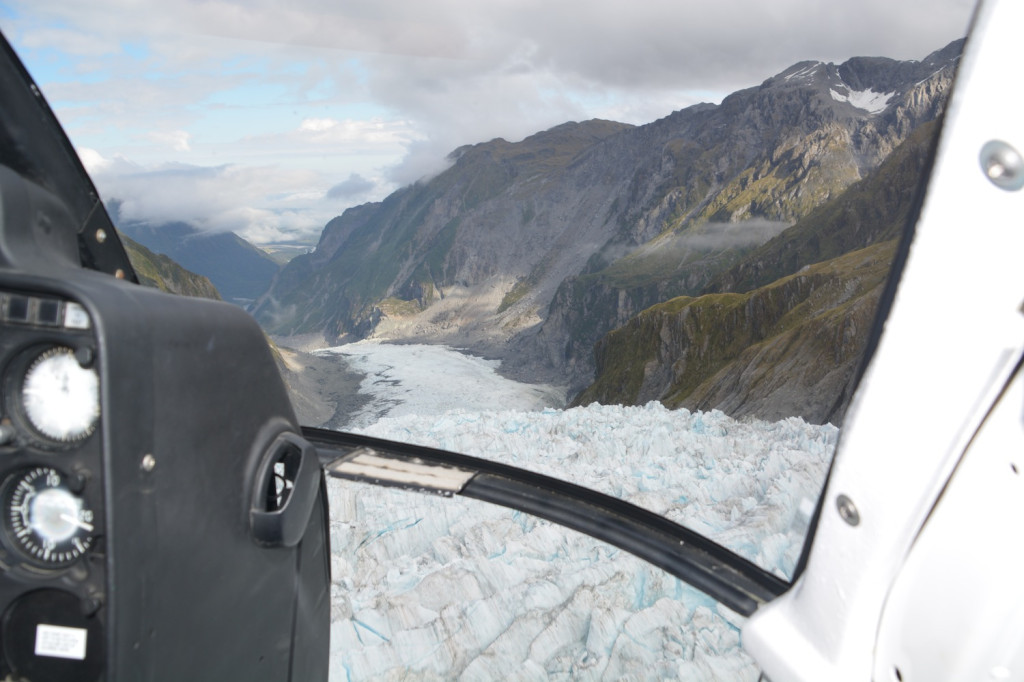 The flight back down Fox Valley 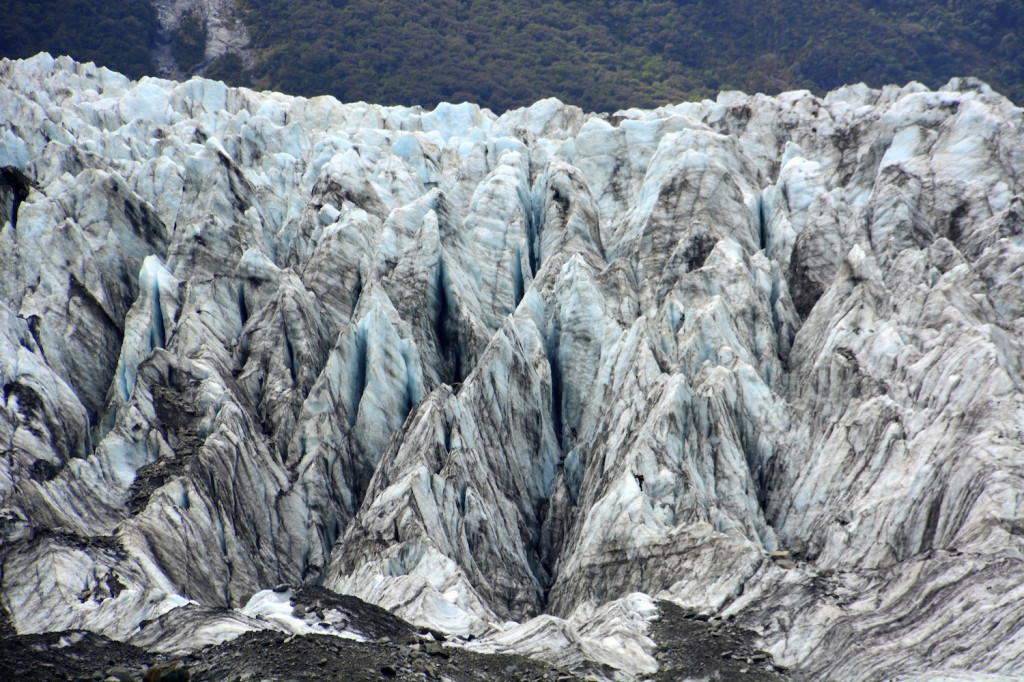 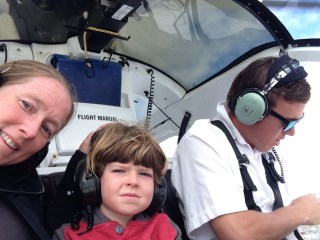 A steep climb up the valley

A tour around Mt. Cook 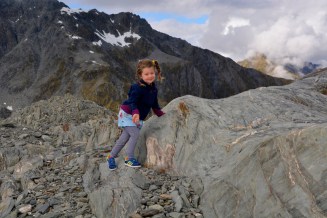 Eilir making her way to the summit

Snowball arsenal in the making 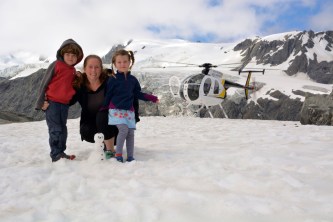 The flight back down Fox Valley

We took a walk in to see the calving face. Phineas was not excited.

A view from the valley floor hike in

A fitting lunch after glacier landings 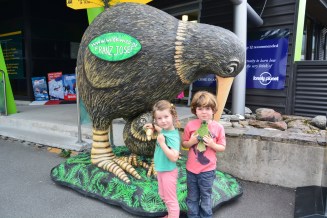 Checked out a kiwi breeding center in Franz Josef 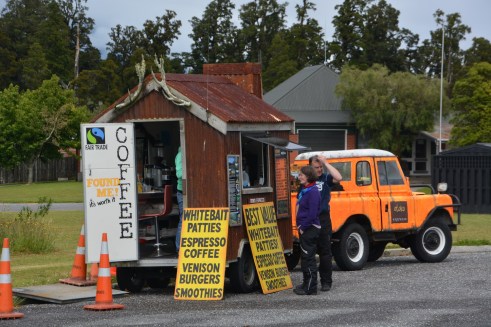 Yep, this place is rural. Whitebait fritters are a tasty snack, though, and can be found alongside the coastal roads.
Tags: fox glacier, franz Josef glacier, helitours, new zealand, travel with kids
From: Scenic, travel
← From Hotels to Motels to Gotels: New Zealand in a Campervan
The Landscape of Childhood →
One Comment