The Hill Country and Ancient Cities of Sri Lanka 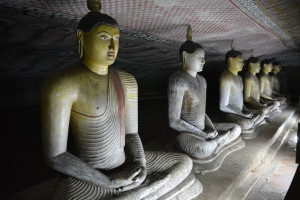 Sri Lanka enjoys a rich history, a laid back island culture, and some pretty awesome landscapes and scenery. We hired a car with driver for 10 days to tour the island’s sights, first winding our way up small mountain roads through the tea plantations, then to the important old capital of Kandy (where the tooth of Buddha is stored in the temple of the sacred tooth relic), and continuing on to the northern plains where one can find the ruins of ancient capitals and buddhist monasteries. We were not able to hike up to Adam’s Peak, also known as Siri Pada, or Holy Footprint, but we glimpsed it from afar. It is perhaps the most pilgrimaged holy site on the island: the Buddhists believe it was the last step Buddha took before entering paradise, the Christians believe that it is the first place Adam placed his foot on earth after being cast out of heaven, and some know it as Samanalakande, or Butterfly mountain, where butterflies go to die. For us heathens, we pilgrimaged to Little Adam’s peak, where we did a little dance upon summiting. 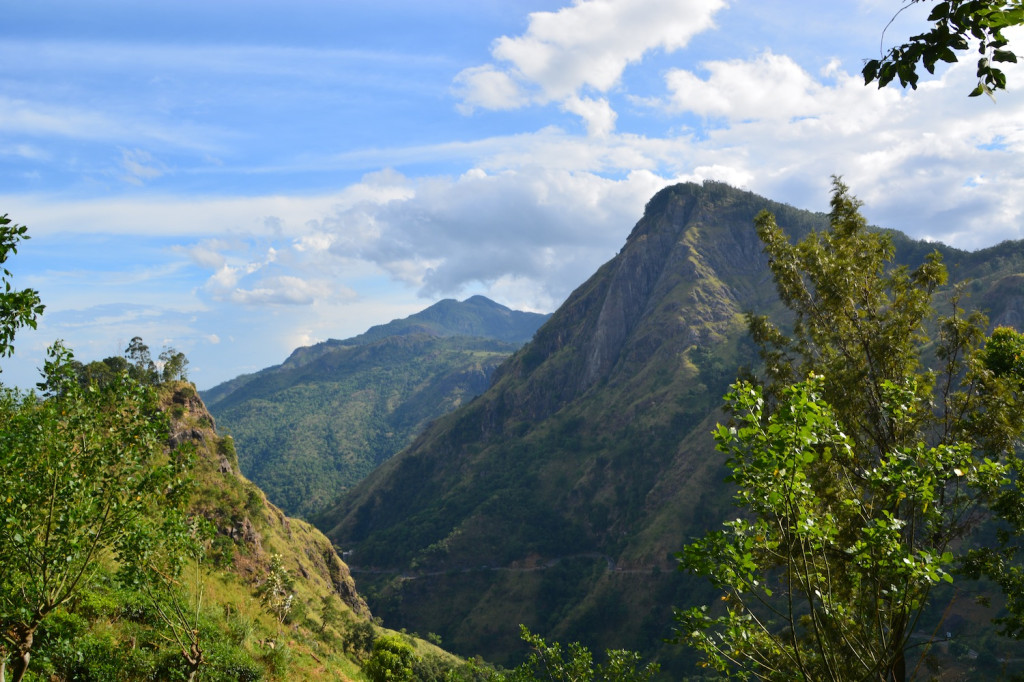 The hill country town of Ella

The hills of Sri Lanka once produced mounds of coffee, but in the mid 1800s suffered from a fungal disease called coffee rust, and it was all downhill from there as Ceylon converted its hillsides to tea production. Today Sri lanka is the world’s 4th largest tea producer and was just recently usurped by Kenya as the world’s largest exporter. Another lesser known fact is that 80-90% of the world’s real cinnamon is produced in Sri Lanka. The land itself is absolutely beautiful. It is full of mountainous peaks with lush terraced hills of green, all enshrouded in a cloud-like mist, which makes photography quite difficult. As we rode the train through the region, we observed the tea industry from afar, watching thousands of ladies making their way through the fields picking the tips of the tea leaves, placing their harvest into woven baskets carried on their backs. We also visited a tea plantation and factory where we learned the various steps and processes to bring tea from plant to cup. There is still a lot of manual labor in this operation, but we did see some cool mechanical sorters and electronic color sorters busting out tea leaves in grades, but there were no pink clad quality control teams in sight.

Tea plantation workers on a break

On our visit to Kandy, we had the kids convinced that out little cottage would be just like the one that lured Hansel and Gretel in, and it was not that far off the mark! The town itself was unremarkable. We visited an elephant orphanage, but the kids were more concerned with the Muslim ladies in Burhkas, still holding on to the notion that they are actually ninjas. We climbed the rock at Sigiriya (Lions rock), 200m high, to see the ruins of an old monastery on top, and climbed yet again to the ancient cave temples at Dambulla. All the while Phineas and Eilir clamored to be carried. We wonder how they will fare on our next stop: Nepal, for a 6 day trek in the Annapurna foothills! We’ll call ahead and request extra sherpas for sure. 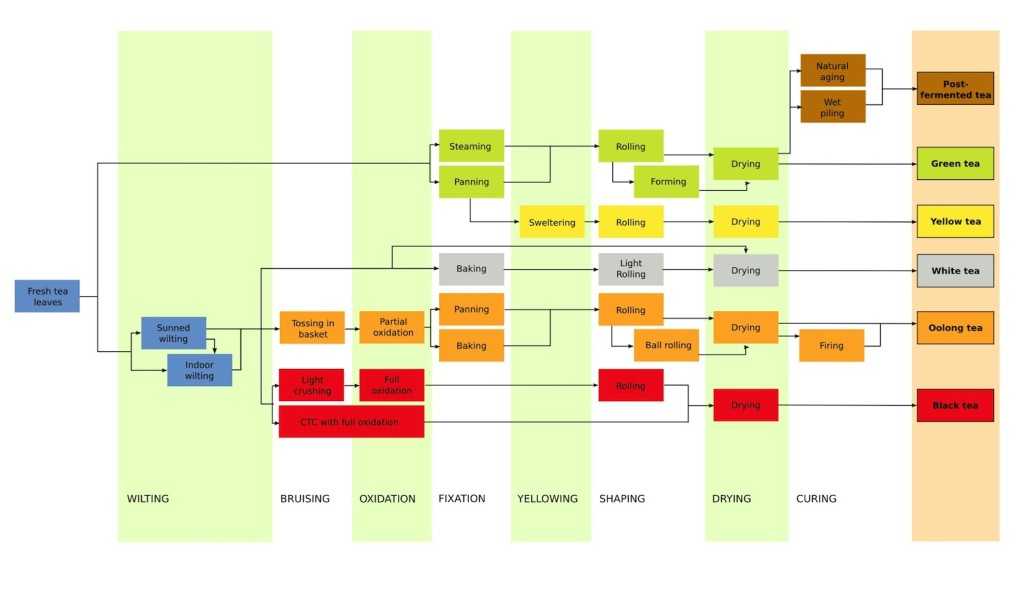 Just follow these easy steps to a perfect cuppa tea 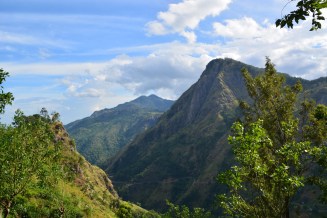 The hill country town of Ella

Our hike up to Little Adams peak

Giddy that the hike is over 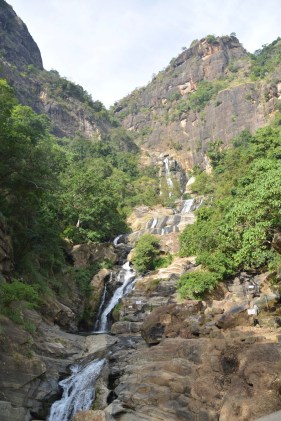 One of over 100 waterfalls we saw along the way

Drying chilies and laundry in one fell swoop

Awaiting our train in Ella. It was delayed, no surprise! 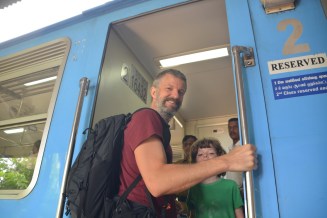 Winding through the hill country

Tea plantation workers on a break 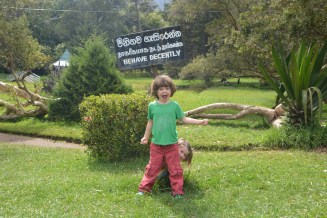 The botanical gardens in Nuwara Eliya 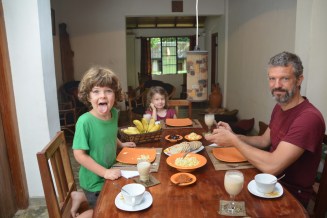 Bathing an elephant with our mahout

It’s a little slimy in the mud here

One very, very angry little man. Even cashews couldn’t cheer him up.

Monkeys at the top

We tried about 8 different kinds of bananas- this is the only place outside of Hawaii where we’ve found apple bananas, our favs 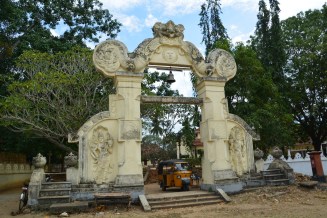 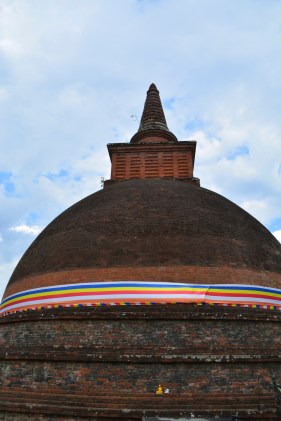 A teeny tiny buddha on the stupa

The small rock we are to climb up, 200m high, but it looks gigantic

A view of a buddha across the valley 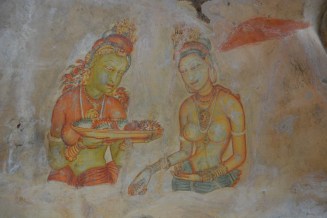 Collapsing and we’re only 1/3 the way up!

The midway point: there used to be a lion’s mouth to enter through. now you can only see the paws.

Summit of Sigiriya with expansive views 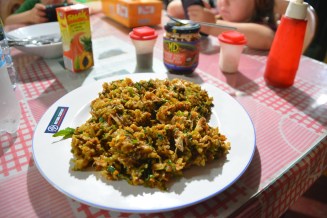 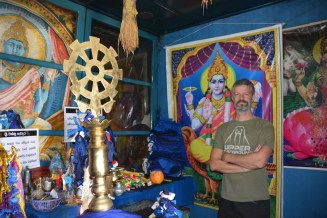 Ah, back to Krishna in blue

The cave temples of Dambulla 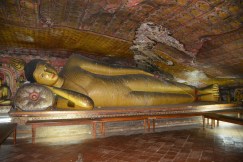 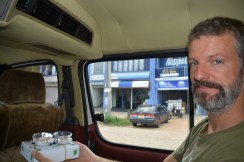