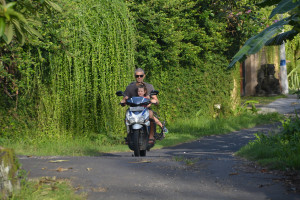 I have spent more time on Bali than any other surf destination, except for California. I came here several times in the 1990s, learned everything about the different breaks, and had some of the best waves of my life. I also ventured over to the neighboring islands Lombok and Sumbawa to find more waves with less people. One year when I was a little bored of university life in Stockholm, I enrolled in two classes that had no mandatory attendance except the final exam, Vector Calculus and Advanced Mechanics, if I recall correctly. I bought the books and went to Bali for 3 months, surfed every day and studied in the evenings. I had a pretty good routine going: wake up before sunrise, ride my motorcycle to Canggu if the tide was high, Bingin if the tide was low, surf until the crowds show up, have breakfast, and then more surfing, usually Uluwatu or Nua Dua depending on the wind and the swell. All that time on Bali had a huge impact on me as a surfer and in retrospect I think it also had a big impact on me as a person. Bali is a unique place with incredibly friendly people and some of the best waves on the planet. Spending time here really teaches you to relax and live in the moment, cheesy as that may sound.

It felt a bit peculiar to return to Bali after not visiting for 15 years. There has of course been a tremendous amount of change: new developments, more tourists, new previously undiscovered surf spots, more traffic. We had read and heard very mixed opinions about what Bali is like in 2013, with some sources even recommending to not even go to Bali because of over-development. We really didn’t know what to expect. Our strategy was to move around quite a bit and try our luck in different parts of the island, and also be prepared to leave the surfboard at home occasionally and enjoy everything else that the island has to offer if that was what the waves (or lack thereof) dictated. 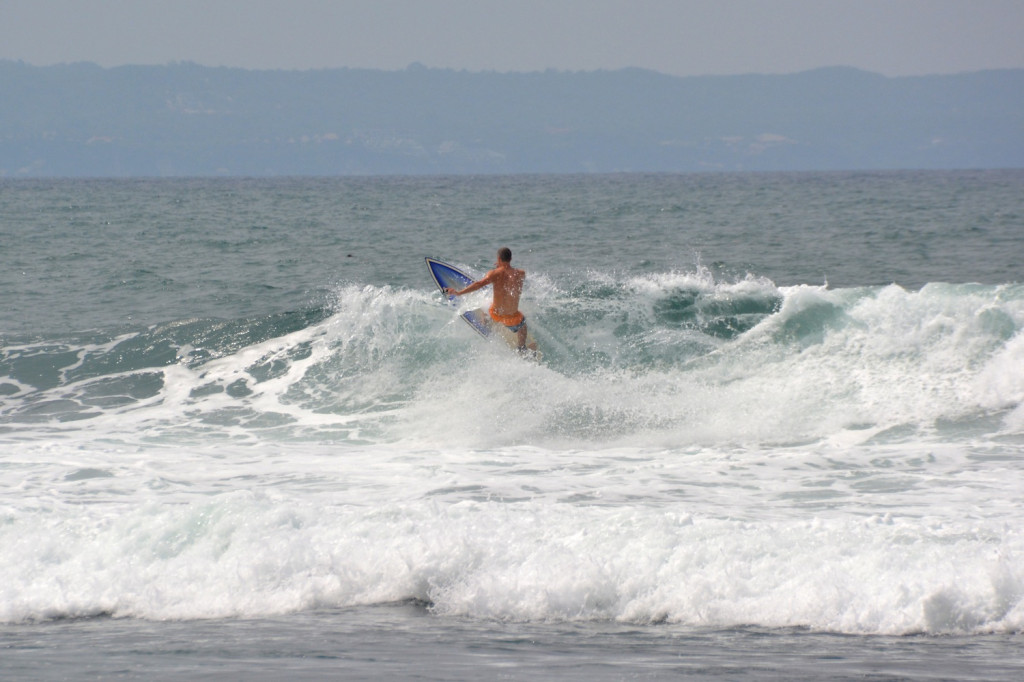 We had the best surf, by far, at Nusa Dua on the east side of Bali’s southern peninsula. We stayed for about a week at a hotel on walking distance from the surf, and I even went back a couple of times after we had moved to the other side of the island. Nusa Dua is a big, right-hand reef break that picks up plenty of swell (meaning that the waves are usually a bit bigger here than at other places). The reef is about a kilometer from the beach, so it is either 20 minutes of paddling or a $4 boat ride to get to the waves. This inconvenience, combined with several newly discovered surf spots close by, means that the waves at Nusa Dua don’t get very crowded. I had a few days when the waves were 3 to 4 feet overhead, glassy, with long rides, and only 5 other surfers out. It could definitely be worse! Surfing Nusa Dua was just like I remembered it from 15 years ago. Not too much new development on the beach, great waves, and not too many other surfers. Just like Bali should be. After the surf one day, I ran in to a South African guy who lives on Bali that knew some of the Swedish expats that I used to surf with back in the 1990’s. He called them up so that I got a chance to say hi after not talking to these guys for 15 years. It is fascinating what a small community the surfing world is. 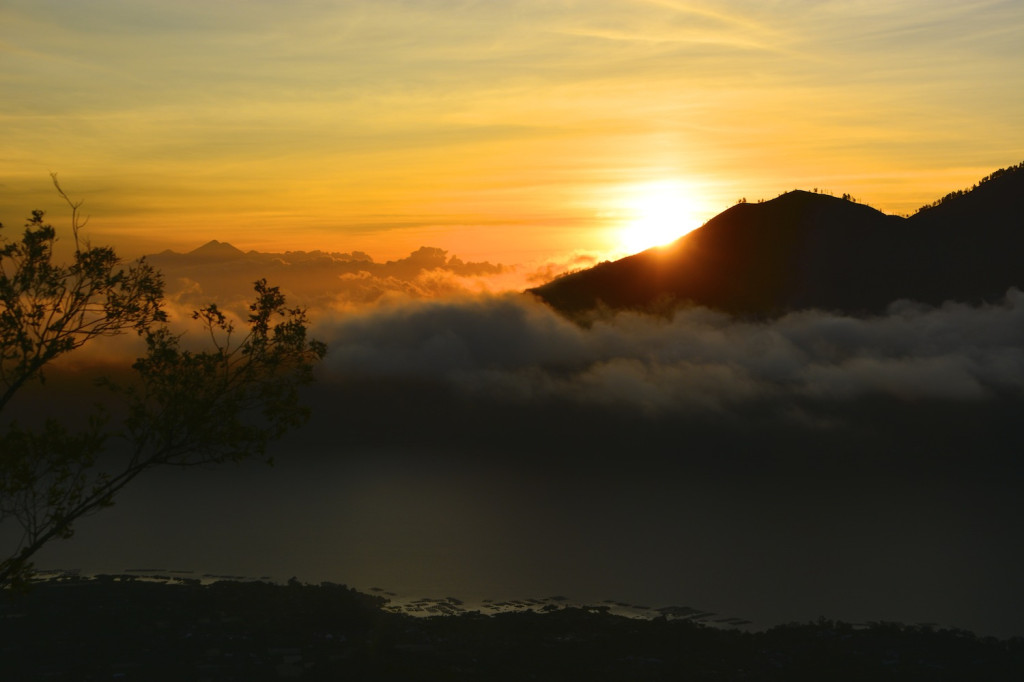 There was also a lot of down time. On a flat (no waves) day, Alexis and I decided to do the famous hike up the Gunung Batur volcano (1717m) in northeastern Bali to see the sunrise over lake Danau Batur and the surrounding mountains. Alexis had done this hike last time she visited Bali in 1995 but felt that it had to be done again. She was after some form of redemption. I learned that this hike was the site of her only argument with her traveling companion, Cathy, with whom she backpacked around the world after MIT. The hike starts in the early morning hours (3AM) when it is still pitch black. We had a clear sky, full of stars but only a sliver of a moon. Luckily our guide had some extra flashlights. After a couple of hours of huffing and puffing up a steep single track path of loose volcanic rock, we arrived at a small cabin where we had hot tea and were treated to boiled banana smeared between toast breads. Even though we had seen the picture of long pants and windbreakers in the brochures, we did not prepare adequately for the strong winds whipping through our sweat drenched single layers: it was chilly! After an hour of waiting, perched with 100 or so others at the warming hut, we saw the sunrise behind the silhouettes of volcano Gunung Abang (2152m) on the other side of the lake, Bali’s highest peak Gunung Agung (3148m), as well as Gunung Rinjani (3726m) on neighboring Lombok. Perhaps the coolest aspect of the view is the clouds that fly by, alternating between obscuring the entire view down the valley and clearing up. After the breakfast break we continued onto the peak, which is on a portion of the semi-circle shaped crater rim, for a mandatory summit picture. The volcano hike is a very nice break from the beach, and we highly recommend it. The hike is strenuous without killing you, the view is breathtaking, and the whole adventure is done well before lunch. 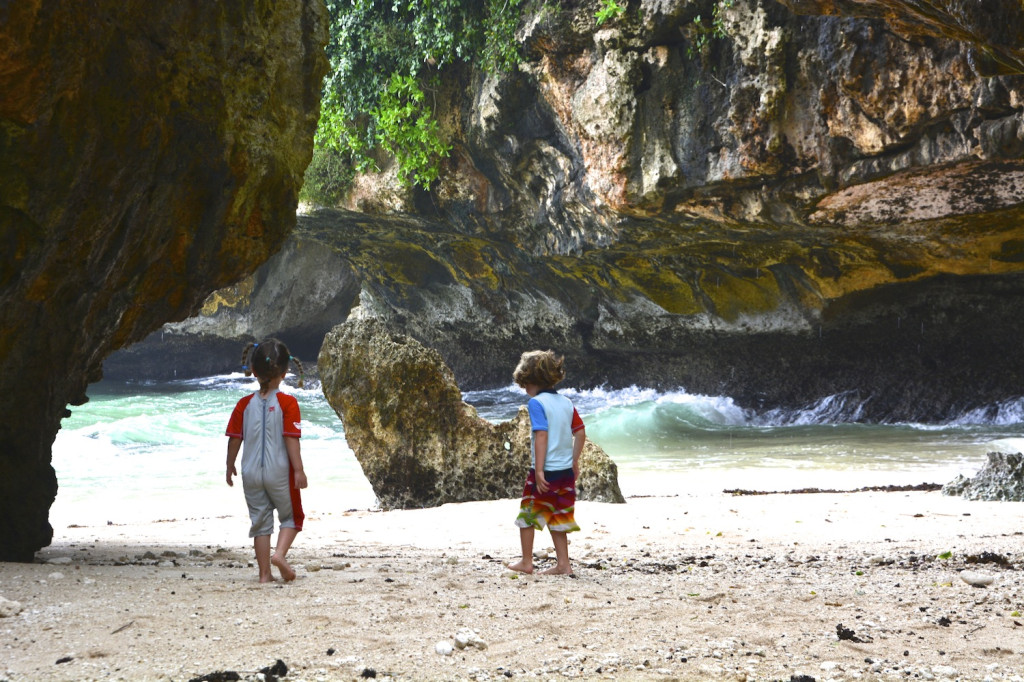 Phineas and Eilir playing in the cave at Uluwatu

Most of the highlights of the month on Bali, and indeed of the whole trip, involved watching the kids explore new places and experience things for the first time. We took them to the beach at Uluwatu, one of the best surf spots in Bali and the place that put Bali on all surfers must-visit list when it appeared in the surf movie Morning of the Earth in 1971. It is an absolutely beautiful place: there is only a very small sandy beach between high vertical lime stone cliffs and the only access to the beach and the ocean is down a steep path and through a cave. We visited on a windy, gray, overcast day with very small surf, but Phineas and Eilir loved exploring the cave and playing on the small beach beneath the high cliffs. 40 years after Uluwatu was discovered, now with several hotels and restaurants on top of the cliff where it used to be jungle, Uluwatu still offers a dose of the Balinese magic. 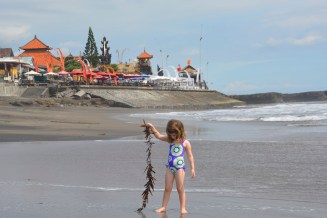 Playing on the beach in Canggu

The board from South Africa now resides in Sri Lanka. This is what we picked up in Bali. 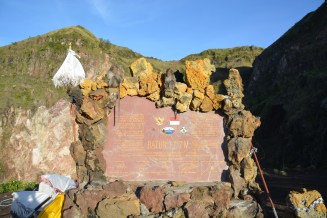 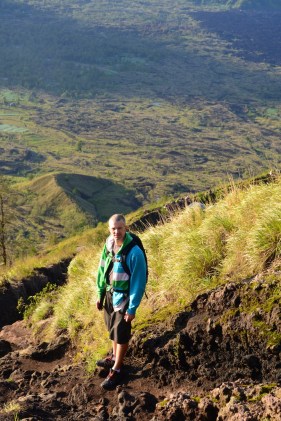 Fun on the days with no waves

Performed by professional driver on a closed track. Don’t try this at home. 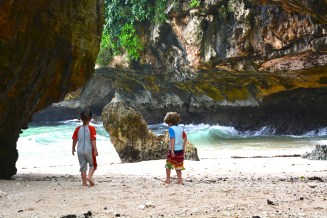 Phineas and Eilir playing in the cave at Uluwatu

Inside the cave at Uluwatu 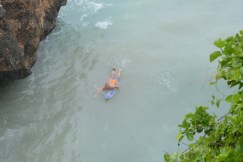 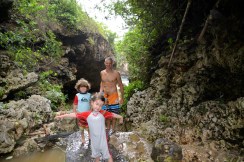 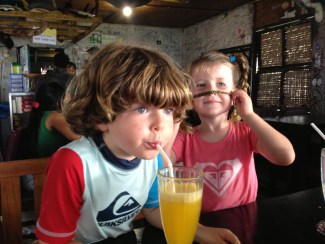 Breakfast at the warung on top of the cliff at Ulu 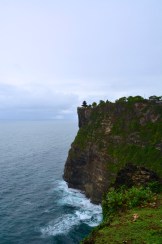