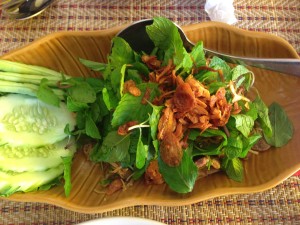 We were really looking forward to the food in Southeast Asia, especially after spending two weeks in Nepal, which is not exactly a place one visits for culinary reasons. Laos and Cambodia are squeezed between the two culinary powerhouses of the region—Thailand and Vietnam—but they actually have quite interesting cuisines of their own.

Many of the ingredients used in Laos are of course similar to the neighboring countries: chiles, lime, lemongrass, fish sauce, and galangal are commonly used. But the food is less sweet compared to Thai food or Vietnamese food, and there are little twists to the dishes that make them uniquely Lao, such as the use of dill in many of the stews, combined with the aforementioned spices. We had several fish dishes where dill played an important role in the flavor profile, which actually reminded me of Swedish food, but we also had buffalo and chicken dishes flavored with dill, which was slightly less expected. Another central part of the Lao culinary national identity is the fact that the Lao people eat more sticky rice than any other people. No meal is complete without sticky rice served in a woven bamboo basket, and it is usually eaten by hand-forming it into little spheres that are then dipped in a sauce, stew, or whatever is served alongside the rice. 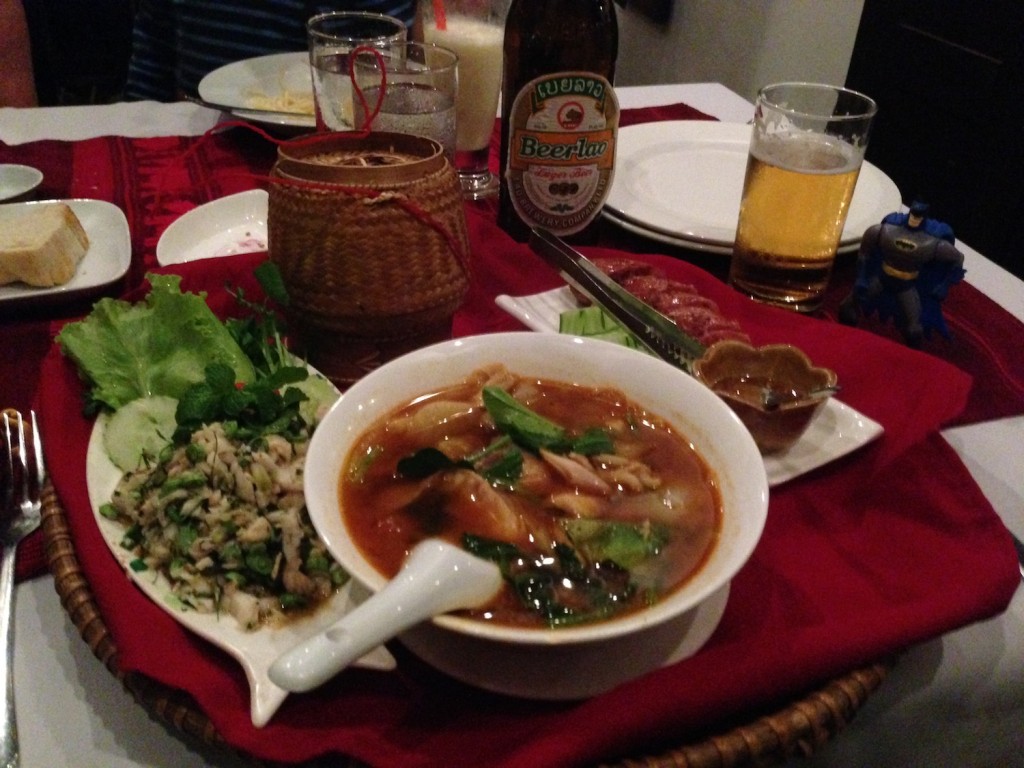 Although ubiquitous, the national dish is not plain sticky rice: it is Larb (sometimes written Laab or Laap). I actually had no idea that Larb is a Lao dish. I’ve had it before in the US but I could have sworn it was in Thai or Vietnamese restaurants. In case you are not familiar with Larb it is a salad made primarily from herbs: mint, basil, cilantro, lemongrass, etc. with finely chopped meat (buffalo, pork, chicken, fish, or tofu for a vegetarian version), dressed with lime, fish sauce, and lots of chiles. The best versions are absurdly flavorful with lots of mint and achieve a perfect balance of spicy, sour, savory, and a touch of sweetness. It should basically taste like a Mojito with chopped meat in it. In fish Larb the fish can be either cooked or raw. I had a fantastic raw salmon Larb in Vientiane that was a little like ceviche but much more flavorful. There are allegedly also raw meat Larb dishes where blood is added to the dish, but we never came across these versions. 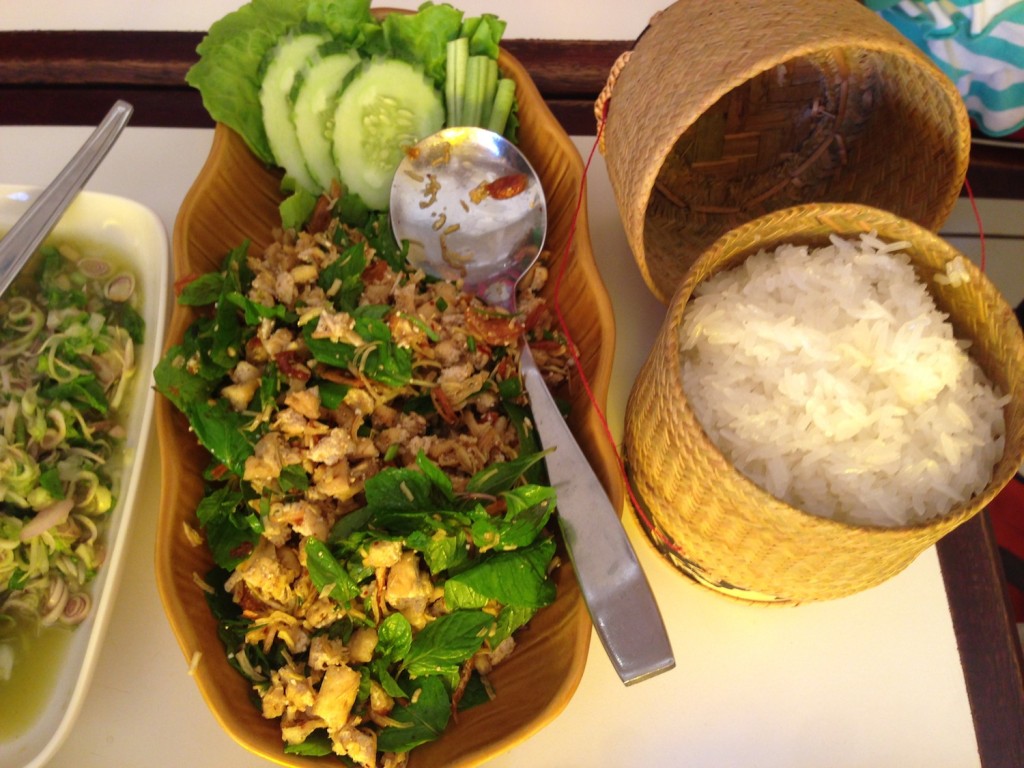 Tofu Larb and sticky rice at Lao Kitchen in Vientiane

Some of the best food we had in Laos was at a small place in Vientiane called Lao Kitchen. Their Phan Miang was a very interesting starter consisting of a crunchy, fiercely spicy mixture of finely chopped lemongrass, shallots, green onions, ginger, and herbs, dressed with lime and fish sauce, that was served with betle leaves and roasted peanuts. We were instructed to wrap a couple of peanuts and some of the vegetable mixture in a leaf into a one-bite morsel. It was almost too flavorful but it worked somehow due to building an equilibrium between too spicy, too savory, too sour, and too salty. It was one of those violently seductive and totally addictive dishes that causes your flavor receptors and whole nervous system to confuse pain with pleasure. Its similar to experiencing good Szechuan food, but different flavors. Lao Kitchen also had fantastic larb; we had both the duck the tofu renditions. Both were perfect: crunchy, with more herbs than meat (or tofu…), and bursting with flavor.

The food in Cambodia is similar to the food in Laos (and Thailand) but substantially less spicy. The Khmer cuisine has a very long history, but of course any cultural development, culinary or otherwise, was not only interrupted but took several steps backward during the Khmer Rouge era. The national dish is Amok Trey, which consists of freshwater fish in a mild curry paste wrapped in a banana leaf and steamed. Mild, but fragrant and very tasty. The Khmer curries are sweet and watery, with coconut milk and with lots of potato and sweet potato, similar to Thai curries but milder. We only spent one week in Cambodia and primarily in Siem Reap, where the restaurants for the most part cater to all the tourists that come to see Angkor Wat. Most restaurants offer Khmer dishes, but also Thai food, Chinese food, pizza, hamburgers, etc. It is probably safe to say that we didn’t experience the most authentic Khmer cuisine. Perhaps we’ll go to Phnom Penh next time. 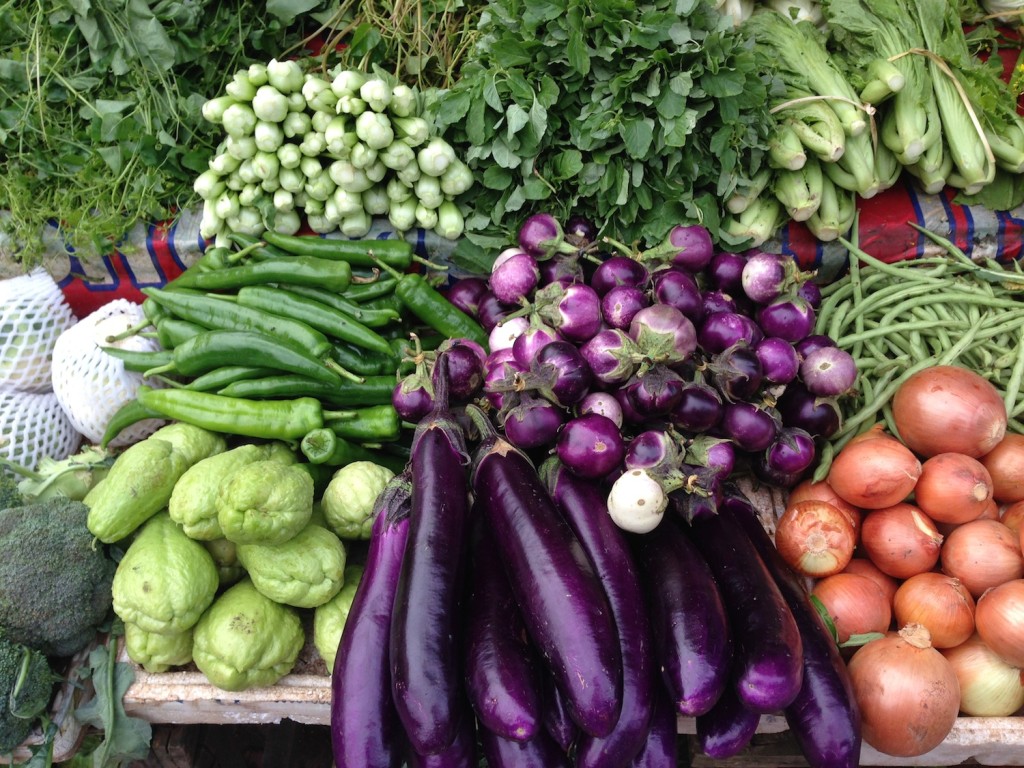 Über-fresh vegetables for sale at the morning market

Great food naturally starts with great ingredients and both Laos and Cambodia have beautiful markets every morning where everything from vegetables, herbs, and chiles, to live ducks, to dried fish and other sea creatures, to fermented(?) maggots were sold. It is an intoxicating experience to stroll around these markets and take in the sights and scents. Since we didn’t stay somewhere with a kitchen and hence had no means to cook, we couldn’t get too adventurous in our shopping and had to settle for the various snacks on offer (different deep-fried goodies and fresh spring rolls—we stayed clear of the maggots). And there is always all the beautiful tropical fruit to be had fresh or in smoothie-form: mango, papaya, rambutan, mangosteen, and numerous other.

Lots of temptations at the market

Both countries are heavily influenced by their colonial history as being part of French Indochine. This legacy is written up on the web and in guide books as something that has resulted in amazing fusion dishes and a widespread availability of authentic french bread and pastries. We found this to be slightly exaggerated. Sure, there were baguettes aplenty and there were many cafés that served different kinds of croissants but we couldn’t find anything that was even remotely as good as the stuff in France. Luckily, we came here to eat the local food, not baguettes. Laos and Cambodia have unique and fantastic food. One just has to navigate past the tourist traps, ignore anything that looks French, and not compare it to the food of Thailand or Vietnam. 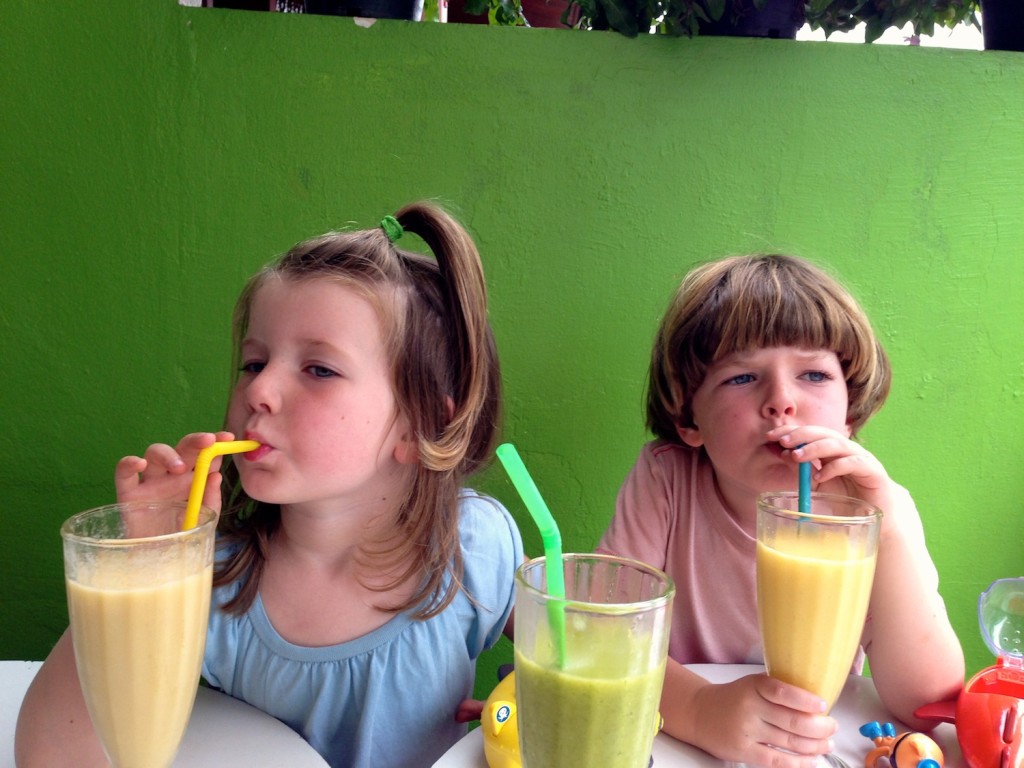