Ever been in Vientiane?

I have to admit it, we find ourselves in Vientiane because I liked the sound of the name. I’ve toyed with coming here for years on weekenders from China, but always felt compelled to see more of China itself. The name Vientiane conjures up images of an old French protectorate, with long-tailed boats meandering up the Mekong river and dotted with golden temples. Laos is a country that is surounded by more powerful neighbors: sandwiched between Vietnam and Thailand, and sharing borders with China, Cambodia, and Myanmar, many of whom have all had their moments of great power in Southeast Asia’s history and exuded their influence on Laos. It is one of only four socialist states officially identified as “communist” (China, Vietnam, and Cuba being the other three). Similar to Nepal, Laos is landlocked among its neighbors, and has suffered a similar fate without the infrastructure to support trade: it has recently climbed its way out of being ranked among the 20 poorest nations of the world according to GDP (based on purchasing price parity (PPP)). As a comparison, Nepal remains ranked 19th poorest country sharing the ranks mainly with mostly sub-saharan african countries, whereas the USA is the 7th richest and Sweden the 15th. Even the mighty, snaking Mekong running through it only allowed Laos one short-lived reign of glory back in the 17th century. 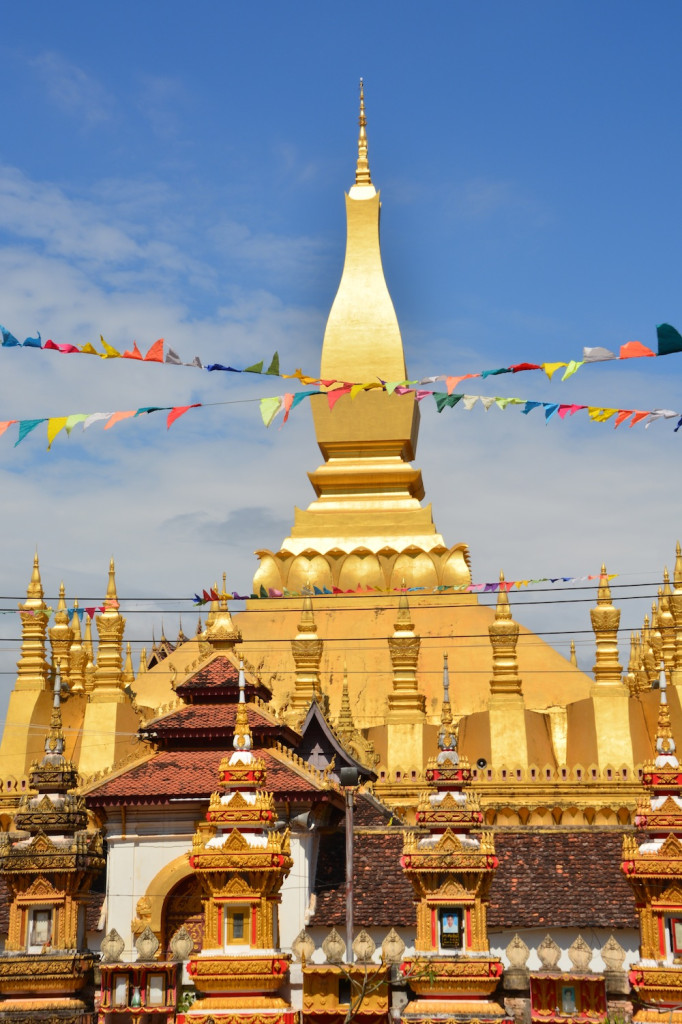 The national symbol of Laos, the Great Stupa: Phat That Luang. Allegedly a piece of Buddha’s breastbone lay within.

Upon hearing of our travels, many people comment on how much the kids will learn on our trip. The truth is that Staffan and I are immersing oursleves in remedial history lessons, politics, industry and GDP analyses, and religious studies that we never had time for amidst our electromagnetism, solid state physics, and differential equations courses. In that vein, the brief and modern history of Laos includes independence from France in 1953 followed by a constitutional monarchy that was quickly abolished by a civil war in the 60s and 70s that saw the communist Pathet Lao come to power uncontested in 1975. During this time Laos was officially neutral in the Vietnam war, but a secret war was raging as the US backed the royal government and the North Vietnamese and the viet cong partnered with the Pathet Lao, using northeastern Laos and its Ho Chi Minh trail system to transport military personnel and goods to South Vietnam. Neutral Vientiane was allegedly teeming with CIA agents and Russian spies during this time, a la The Quiet American. The US focussed much effort on bombing the intricate transport system of trails feeding South Vietnam. For the 9 years between 1964 through to 1973, one bomb was dropped every 8 minutes on Laos countryside, many of which were cluster bombs that are designed to spread out and detonate in air covering a large area. Of the 260 million “bombies” dropped, an estimated 30% (80 million) did not detonate. These Unexploded Ordnances (UXOs) are still at risk of exploding and are spread over much of the country. I visited the COPE center in Vientiane, an NGO backed operation whose mission is to provide orthotics and prosthetics and rehabilitation to those affected by UXOs, where I toured the museum and their operations. It was heart wrenching to learn about as one comes face to face with the present day victims of a 40 year old war. Laos and Cambodia, the top affected countries by way of UXOs, are members of the international convention banning cluster munitions. 113 countries have signed up. The US and China are not among them. 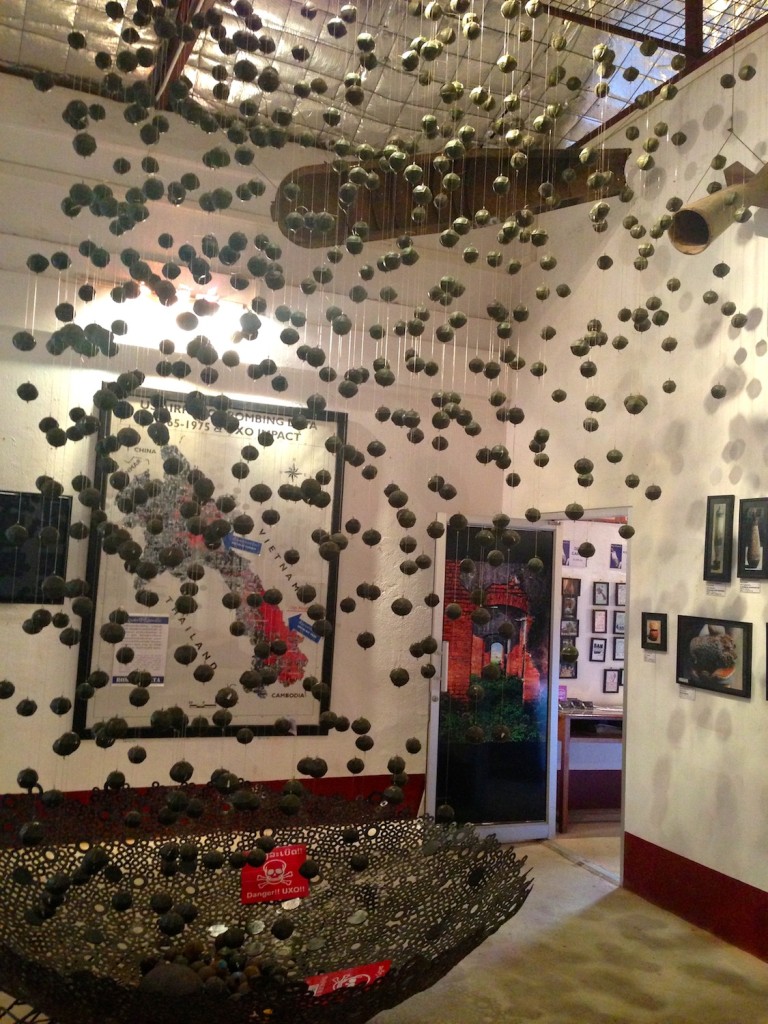 COPE center, Vientiane. A display showing the “bombies” ejected from a bomb mid-air to cover an area of multiple football fields. Of the 80 million remaining undetonated, over 1million have been cleared over the past 10 years through painstaking efforts.

The traffic runs slowly through the three one-way streets that make up the main thouroughfares of Vientiane. Even in the maze of alleys and sidestreets eager to meet the riverfront, we found it easy to stroll or ride bikes, taking in some temples along the way. It is so provincial that you simply ride up, throw down the kickstand, and leave your bike out front as you sip your cappuccino in one of the many street-side cafes or have a look in the local handicraft boutiques. Vientiane is definitely on the up and up: the riverfront park has been nicely developed with walking paths, night markets, outdoor gyms, and playgrounds. Ladies cycle by offering manicures and massages. The budding foodie culture offer fantastique southeast asian cuisine: we were delighted by the laab, the betel leaf wrapped lemongrass snacks, fresh tofu springrolls and the offering of frog leg specialties. Boutique hotels are popping up all over the town. We stayed at a fairly new one, Mandala, that had a wonderful garden setting for its open-air restaurant, fresh yoghurts and croissants at breakfast, and a suite with modern décor and french press coffee selections. For what Vientiane lacks in actual quaintness, we found complete relaxation. It may have taken us more than 3 months to reach this state, but it is finally here. 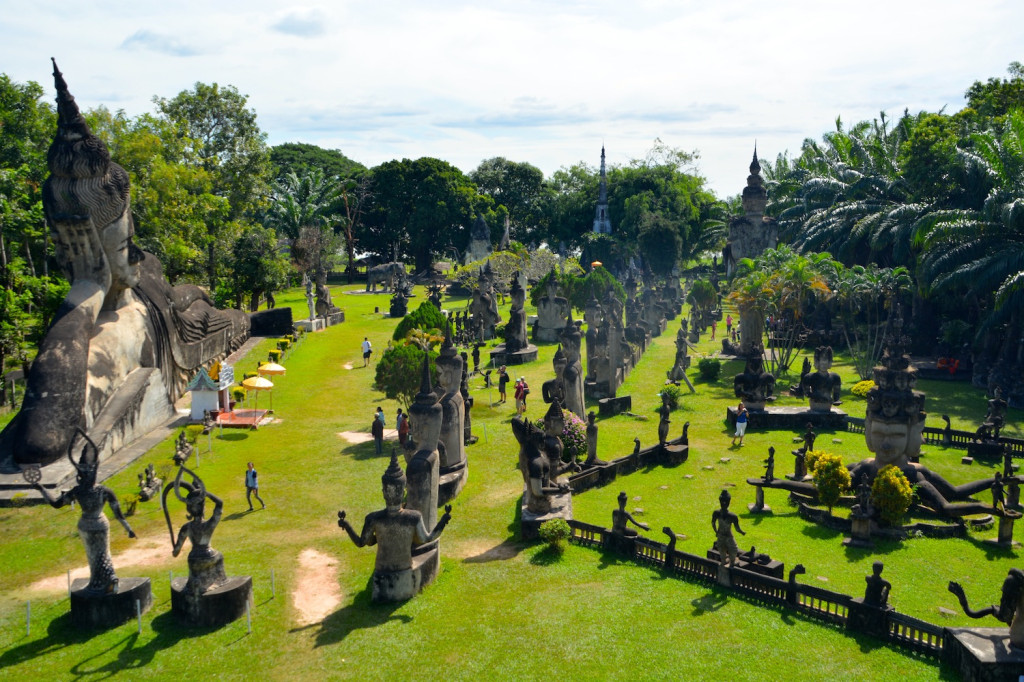 The Buddha park, 25km southeast from Vientiane along the Mekong. 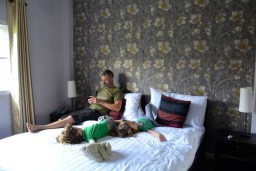 If not enlightenment, relaxation attained! 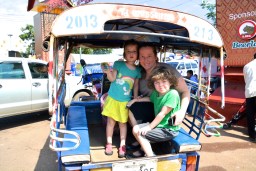 Laos introduced us to yet another style of tuk-tuks, the cart style, capable of multiple pick-ups 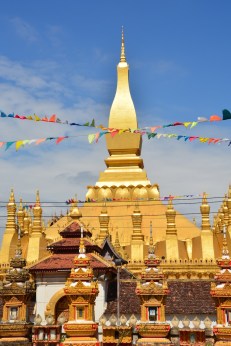 The national symbol of Laos, the Great Stupa: Phat That Luang. Allegedly a piece of Buddha’s breastbone lays within. 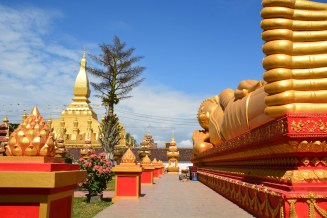 Eilir liked this guy. The monks liked her.

The market. S and I loved the vegetables; P and E looked for toy stands.

Gotta love a communist Buddha park. Both have concrete structures in common.

The Buddha park, 25km southeast from Vientiane along the Mekong. 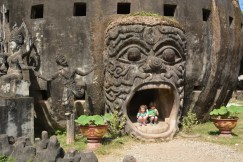 If you go out in the woods tonight, you’d better wear a disguise. Cause today’s the day the Buddha pumpkins have their picnic. 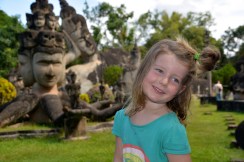 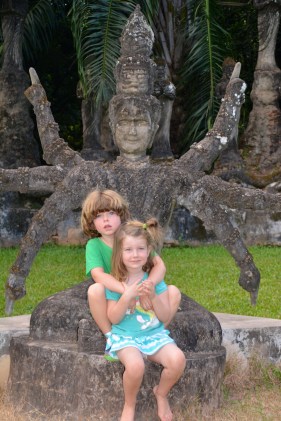 Phineas’ favorites are the multi-armed sort. Eilir would be doomed if he had any more arms as he alternates between hugging her and suffocating her.

Most of the Buddhas here are birthing new buddhas from their mouths. 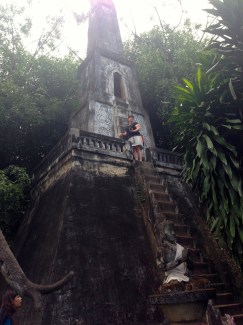 Why did I climb up here. It’s teeming with ants and birds have been resting here. 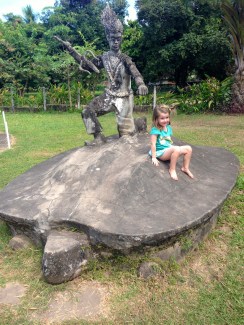 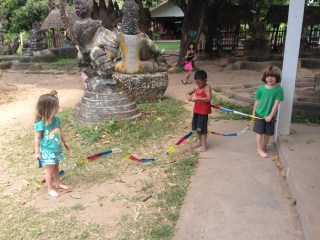 The kids found a local boy to play with.

The big Buddha as an interactive sculpture.

Originally built to house the emerald buddha (who now resides in Bangkok), Haw Pha Kaew was a lovely wooden structure next to the presidential palace.

Phineas is getting tired of this place. 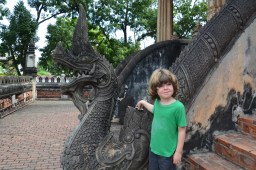 Wat Si Saket houses more than 2000 Buddhas and Buddha images made from different material and of various size. 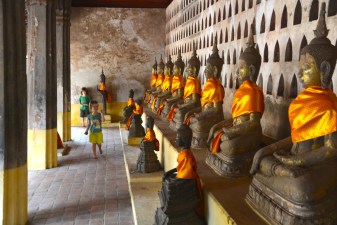 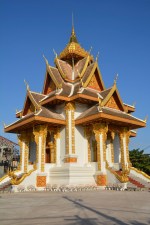 The temple across from our hotel

COPE center, Vientiane. A display showing the “bombies” ejected from a bomb mid-air to cover an area of multiple football fields. Of the 80 million remaining undetonated, over 1million have been cleared over the past 10 years through painstaking efforts. 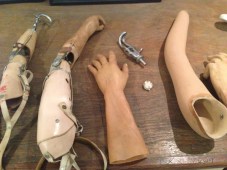 Prosthetic limbs on display at COPE. $75 buys a new leg and fitting.

Noy’s fruit juice stand: the best smoothies we’ve had on the trip so far! 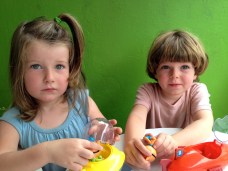 Octonauts out and about, inserting fish dishes. 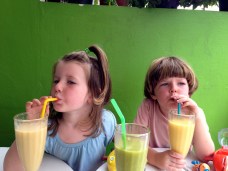 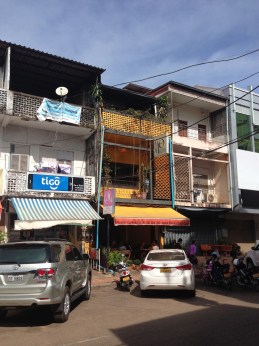 The Lao Kitchen exterior (not quaint) but inside is a dream, with red and yellow walls, all wood seating, and scrumptious food. 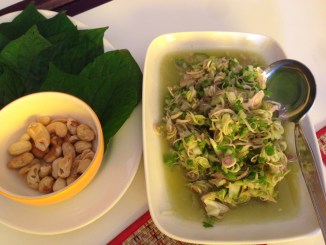 Duck Laab. Staffan will describe in an upcoming food blog.