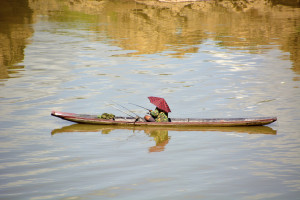 For what Vientiane lacked in quaintness, Luang Prabang made up for in droves. This entire little town, situated on a peninsula at the confluence of the Mekong and Nam Khan rivers, is a UNESCO world heritage site. From the 14th to the 16th century, the peninsula of Luang Prabang was the capital of Lane Xane, the Kingdom of a Million Elephants. Its strategic position along the Silk Route is responsible for the wealth and influence it amassed. Much attention has been put into restoring the traditional wood and bamboo buildings that line the streets. Some of these beautiful buildings have been converted to boutique hotels, but most continue to house local families. It seems there is an ornate, 16th century temple on every block, each with its own special collection of buddhas and unique gilded facades, serene monks carefully tending to their grounds. The sacred and golden Mt. Phousi stupa stands atop a 100m hill in the middle of town and is accessible from a couple of different steeply winding paths. It is to this vista that the throngs of tourists flock at sunset to gain 360-degree views of the town and the surrounding backdrop of rolling karst hills, we among them. Although still tropical, the air in November is reasonable in the shade and wonderfully cool in the evenings. Bicycles are the main mode of transportation through the streets: virtually all hotels offer a quiver of basket-ed, single speed cruisers for loan. Over the course of 6 days, it is safe to say we covered all the streets and alleys of the old town, and came to understand its strong draw for travelers to linger longer than planned. 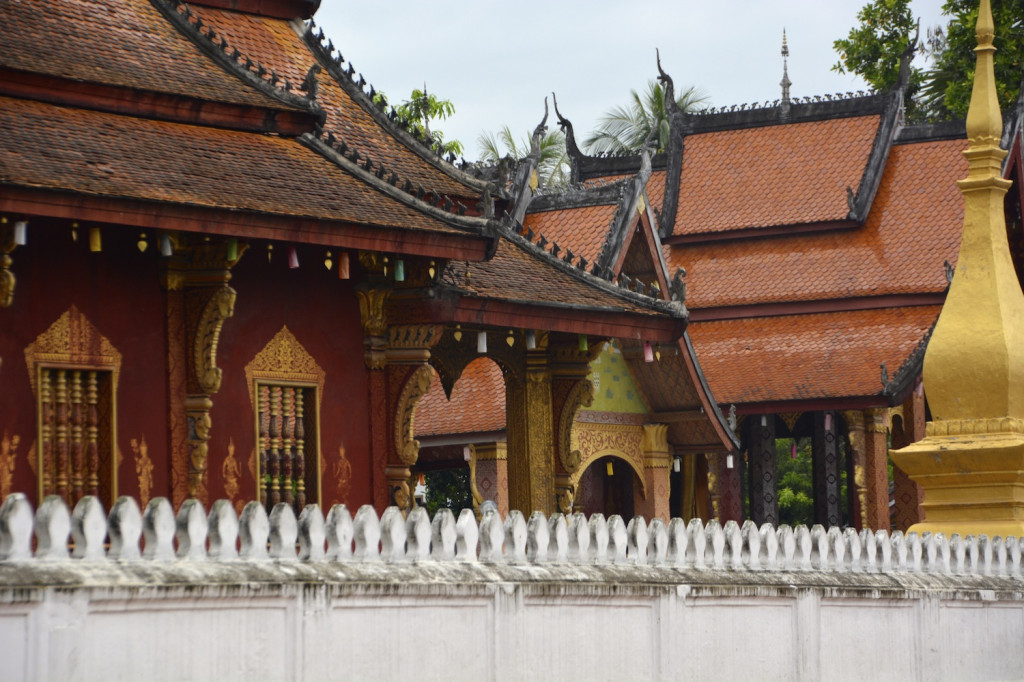 It is hard to walk down a street in Luang Prabang without the company of a few monks here and there. Clad in bright orange and saffron yellows like autumn leaves about to fall from the trees, the monks of all ages walk through the town, black umbrellas in hand to shield their shaved heads from the sun. Every morning just before sunrise, the buddhists residents of the town kneel on the sidewalks outside the temples to give alms, or offerings in the form of food, to the monks, who in turn support the laypeople spiritually. It is a symbiotic relationship that can be found in Theravadic buddhist communities, but is predominant in Laos (locally known as Tak Bat) and Thailand. This beautiful, living buddhist tradition has become a tourist scene, with westerners partaking in the ritual outside of their hotels, and much worse, interfering with the procession to capture the perfect photo. There is an entire movement of locals who are asking the tourists to respect the alms ceremony by not getting in the monks’ paths, by not using flash photography, by not sitting there to offer food if it is not meaningful to them, all to no avail. It has become a circus, and one that left me uncomfortable and a little embarrassed to be an intruder in the land. 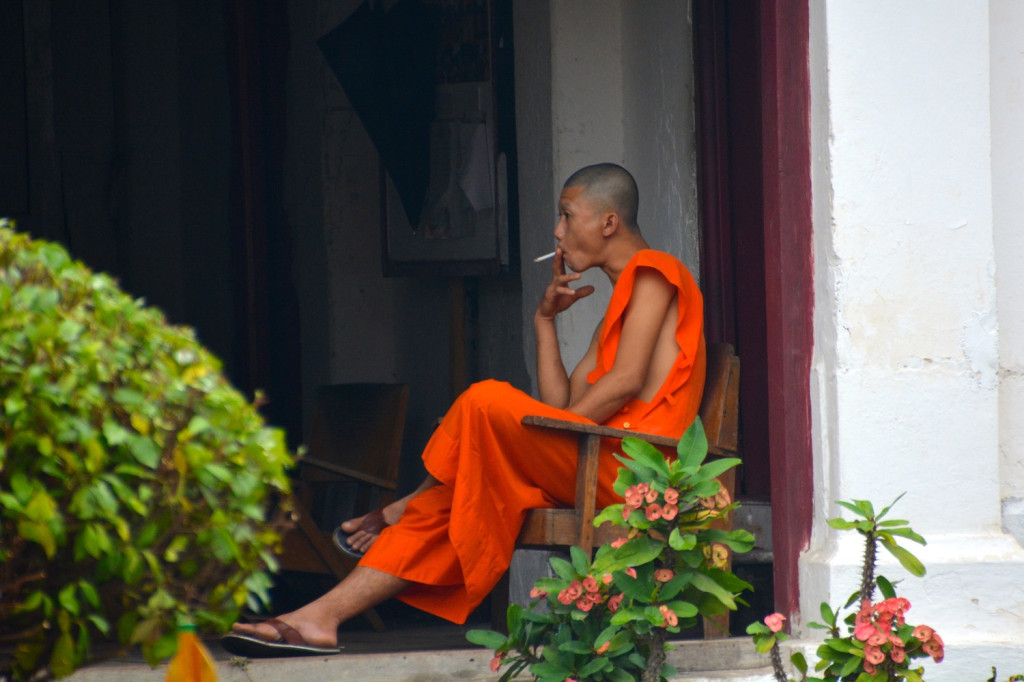 Apparently even the monks have their guilty pleasures…

Our first venture out of town and into the countryside was to visit the Tad Se waterfall, about 12km southeast of town. The flat-bed “tuk-truck” as the kids coined it gave us a bumpy and uneventful ride, our eyes now immune to corrugated metal and thatch-woven abodes, roosters caucusing in the alleyways, and the odd buffalo tilling the muddy fields. We arrived at a village dead-ending in a well worn dirt path down to the river. Buying tickets at a makeshift box office, we boarded one of the 10 or so skinny boats that were waiting for passengers to ferry up the river to the falls. This river was the same light shade of murky brown as the others. Although fish are routinely caught and dinners prepared from them, I never felt an inclination to touch the surface. The kids, on the other hand, gleefully let their fingers skim the surface as we motored along while Staffan and I guessed the varieties of vegetables being grown down the steep banks. After a brief hike up the muddy banks we arrived at shockingly clear blue water pools at the base of the wide, naturally terraced falls. 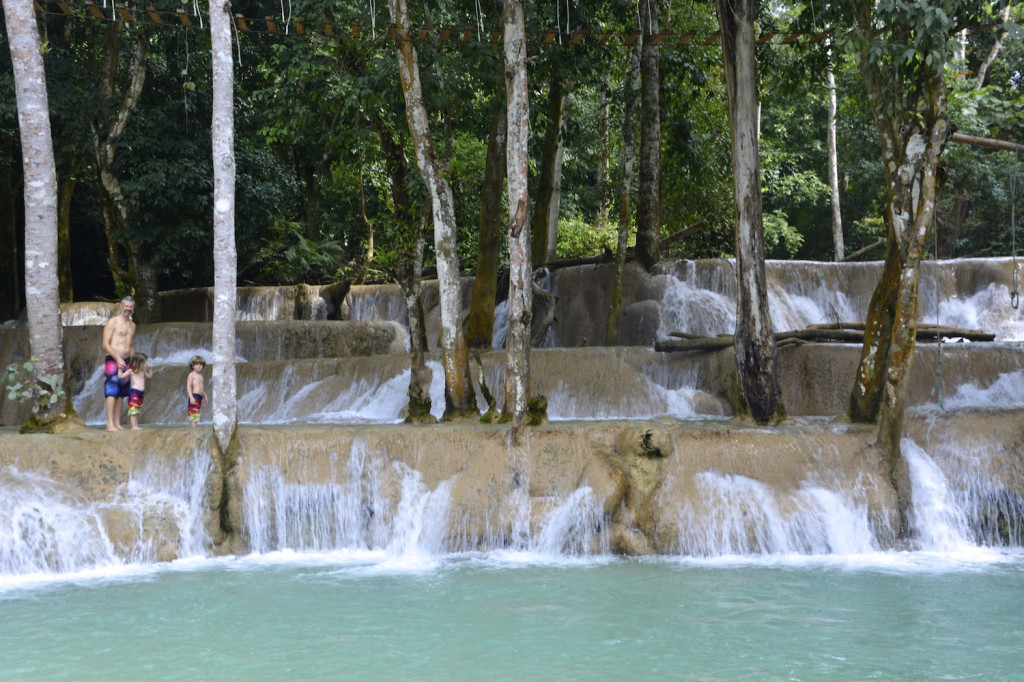 About to cool off in the Tad Se waterfall pools!

We decided to hike alongside the falls into the jungle, following an unmarked and very slippery single track path gently sloping upwards. As with most US National Parks, once we started hiking out of the main falls area, we had the wilderness all to ourselves. Phineas and Eilir were willing walkers. They started reminiscing about the “6 day trek” in Nepal and remarking that a 1 day trek is nothing for them. It was I who was ill at ease: shortly into the hike we came across some very strange looking insects, and it was only then that I recalled reading about this trail months back, the description, “spiders as big as your fist” came back to me. I started watching very carefully at every handhold as we alternately scrambled up and slid down the muddy path. Sure enough, my heightened senses started noticing spiders in my peripheral vision at every turn. At one spot a fallen tree was across the very steep path, requiring you to grab the tree above you to hoist yourself up. My hand came down on a prickly, squishy being that caused my heart to race. Phineas turned back to my shriek only to laugh and state, “Don’t be scared, Mommy: it’s just a porcupine slug!” It was Phineas who spied the first fist sized spider hanging over our path. He boasted of his find. I thought he was mocking me, pointing to a giant leaf that had spikes, until I started walking again and focussed in on the arachnoid itself. Ugh. As we slogged on up the trail, my mind wandered to imagine the soldiers in the Vietnam war, or the civilians escaping the Kmher Rouge, contending with these overgrown paths under duress. The jungle comes to life with its lush and inhospitable environment. I continued on in silence with a raised heart rate. I was spotting spiders left and right- large and small, brightly striped narrow-bodied ones and goofy black daddy long leg types. The prize find of the day was a playground full of long horned orb weaving spiders with shiny mesh covered snouts. (Species: Gasteracantha arcuata). After snapping a few photos, I was done for, unable to lose the sensation of things creeping up me for days. 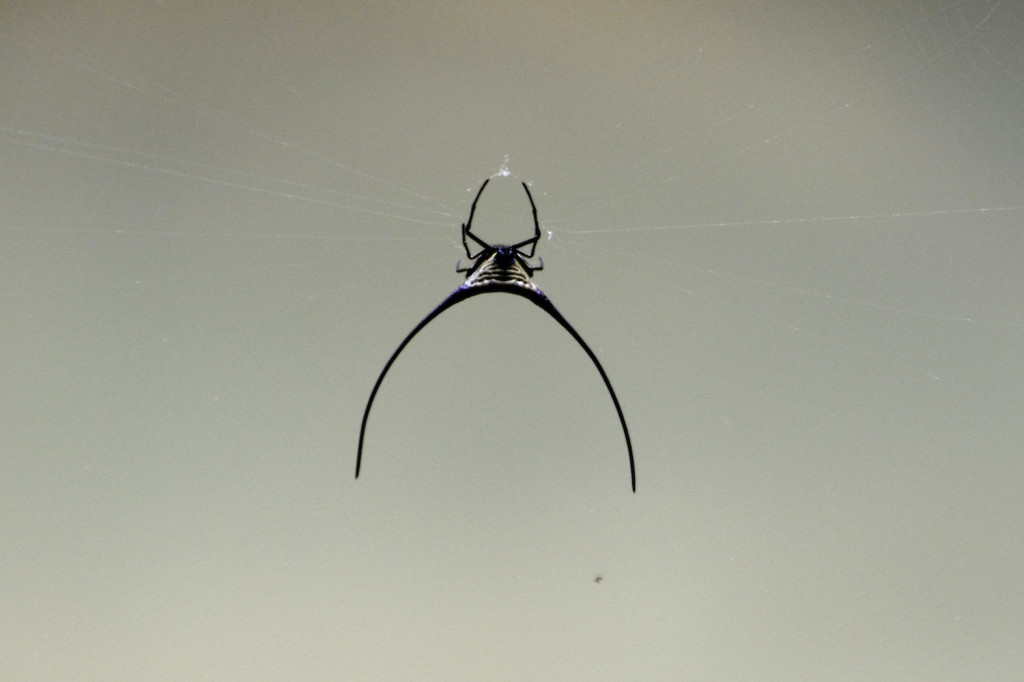 The long horned weaving orb spider, found in the jungles of Southeast Asia.

Our next venture afield was to spend a day on an organic, working rice farm. I had selected this activity especially for the kids, whom I thought would benefit from a long days work. We learned and actually partook in 13 stages of rice preparation, from plowing the rice field the traditional way using water buffalo power, to planting, harvesting, and de-shelling the rice. Staffan and I pressed for information on yields, the price of rice, grades of rice, farmland ownership, and profitability, but we were only able to get fairly basic answers. We did learn a lot about rice farming though, and got very muddy. To break things up, we did a bit of iron smithing, and learned about the bamboo weaving. All in all, it was an interesting day and made a good impression on the kids to appreciate the lengthy lifecycle of food, bringing new understanding to “farm to table”.

Learning to till the rice paddys. The mud is thick and crawling with freshwater crabs, snakes, and of course, spiders abound!

The highlight of Laos for me was simply riding my bike through the streets of town, with either Phineas or Eilir at my back, small hands grasping my waist, and chatting with them as we rode through the streets. Phineas could hum for 20 minutes without pause, only later to unveil some observations about the sights he had taken in. Eilir would narrate the journey, asking astute questions about the way of life or the monks or locals she saw walking and working alongside the sunny streets. Every once in a while we would catch up to Staffan and be able to ride side by side along the river front, stopping in the shade to discuss which temple or cafe we would visit next. It felt as though we had been transported back in time, to provincial France in the 1950s, a little bit of a throwback to Truffaut’s romantic black and white French cinema with a touch of the exotic that travel brings. 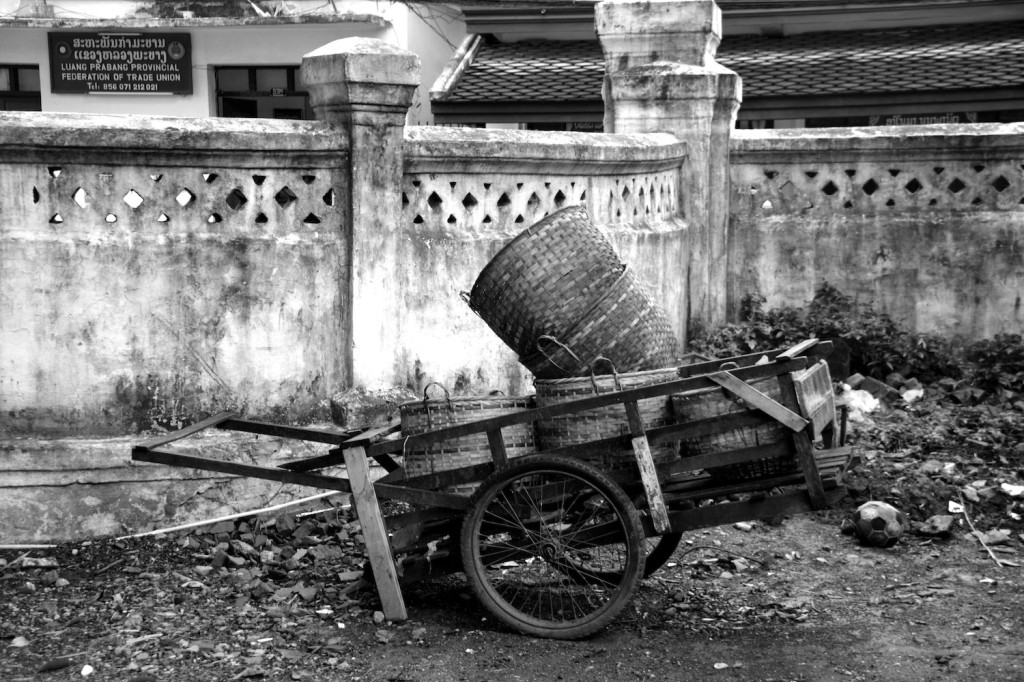 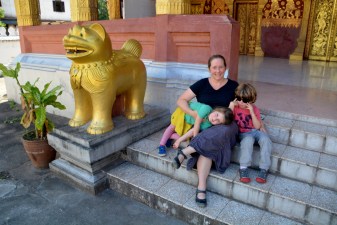 The kids are templed out! Wait till we get to Angkor, think Staffan and I… 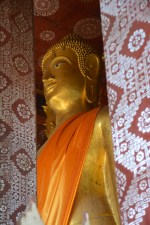 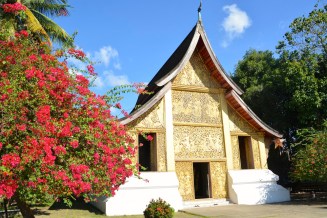 The Luang Prabang Buddha pose, arms straight and down at the sides

Apparently even the monks have their guilty pleasures…

Sunset atop Mt. Phousi. A long line of people were waiting for their turn on the rock.

Sunrise over the Nam Khan 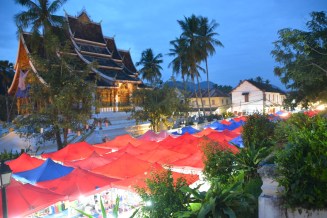 The night market illuminated along the main street in the old town, with the royal temple behind it.

At the night market

Picturesque streets in the evening, lit with brightly colored orbs.

Night market wares for sale. The kids adored the Lao “Whisky” with either a snake, a frog, or a scorpion in the bottle. 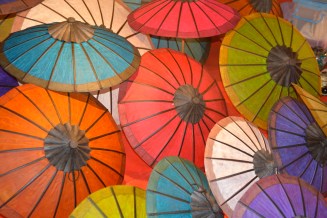 Riding up the river to the falls

The long horned weaving orb spider, found in the jungles of Southeast Asia.

How a leech would such on to our skin

About to cool off in the Tad Se waterfall pools! 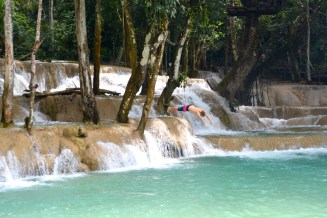 Staffan diving into the deep natural pools at the base of the Tad Se waterfall.

Here we start our days work at the rice farm

Learning to till the rice paddys. The mud is thick and crawling with freshwater crabs, snakes, and of course, spiders abound! 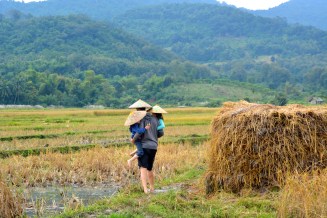 The living organic rice farm, where we came for the day to learn about rice farming and production.

Separating the grains of rice from the husks and debris

Silk worms at work on the Silk Road. We visited a weaving training center for rural women to learn the trade, and got a walking tour of the process.

One silkworm cocoon can produce 500m of thread!

Only natural dyes are used 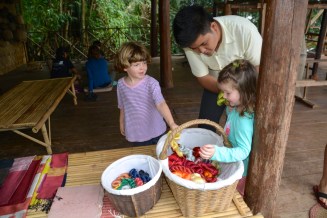 The finished threads make it to the looms overlooking the Mekong. 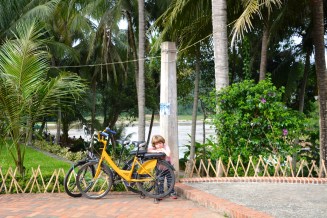 Phineas resting his head on our bikes at the end of town.

A lone fisherman on the Nam Khan 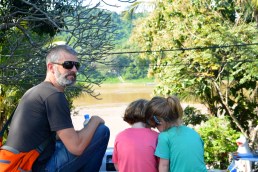 A cycling break at a temple overlooking the Mekong 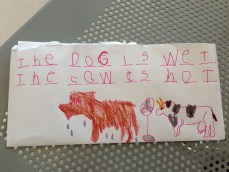