A sweet 4th birthday in Laos 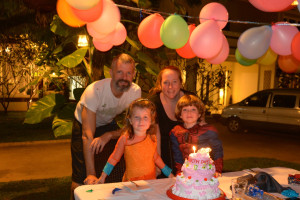 We tried to make Vientiane truly feel like home for Eilir’s birthday. She had been waiting with such anticipation for her party, starting a countdown 27 days in advance, inquiring if she would have a jumpy house and if her friends would be there. When we explained that it would be a more intimate party of four, with just the family, she suggested we could perhaps invite the waiters from the hotel, or our porters and guides from the trek, but we explained that we had to carry on and would be in a new land. 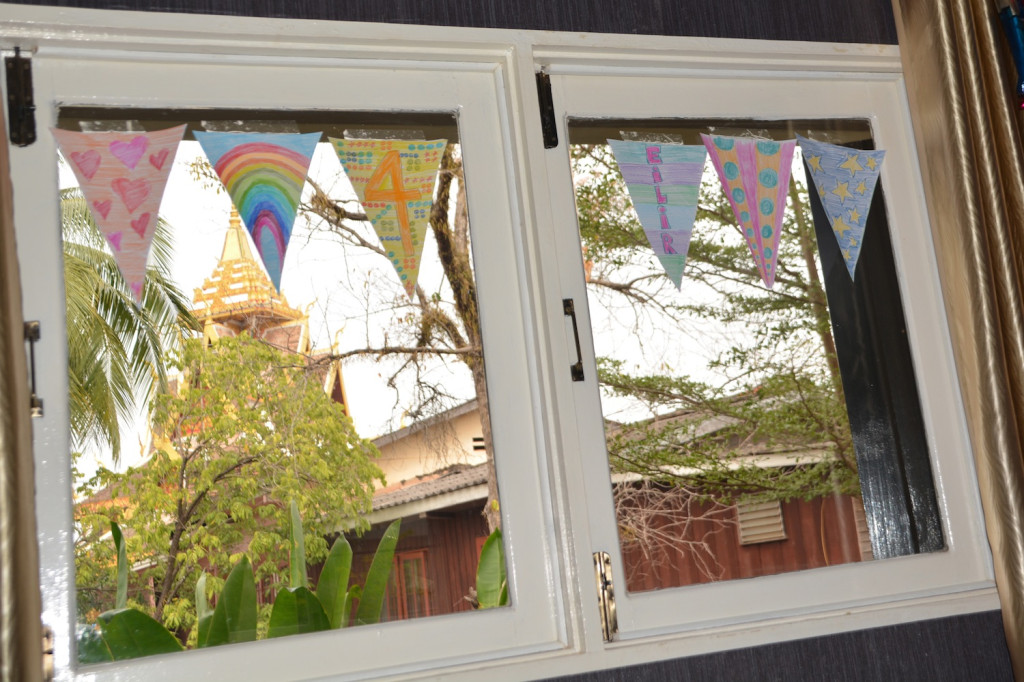 The night before Eilir’s birthday, when she realized she would turn 4 in the night, she inquired how much she would grow while sleeping. From 3 to 4 is a huge step, we responded. “Well, I better get started,” she stated confidently, as she uncharacteristically stopped her chatter and closed her eyes. Eilir has always been a teenager when it comes to sleeping. She’s the last one up every day since she was 2 weeks old, always asking to sleep just a little longer, pulling Woofa, her stuffed lion, over her eyes to keep the dark. We let her sleep in on Nov. 16th to awaken to a room decorated with crayon colored flags and streamers adorning the white bathroom walls (the only place without wallpaper so we could use tape!). Her mandate for the day was: No temples, No palaces, and No new foods. Her one wish was a pink, three tiered cake with red hearts on the bottom layer, yellow stars on the middle layer and blue diamonds on the top layer, and as usual, to become a real fairy. 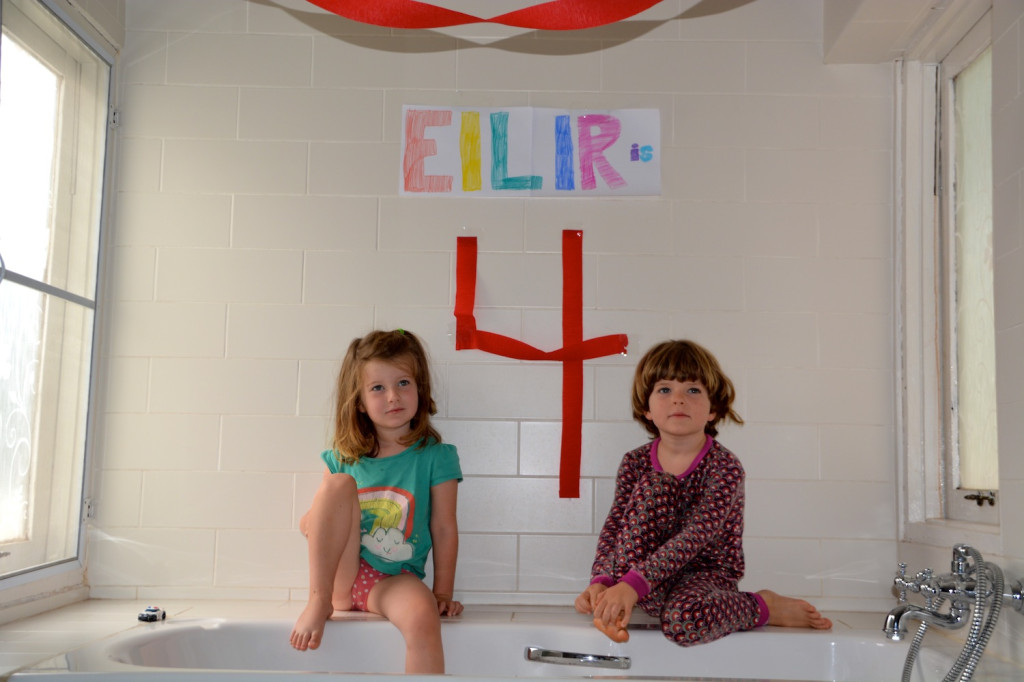 Our decorated bathroom: Eilir is 4!

We started the day with traditional Swedish pastries, green princess cakes, from the Scandinavian bakery we found in town. After opening a fairy costume and some octonauts, she proceeded to play with spiderman for hours, whiling away the morning in imaginary superhero-fairy bliss. We set out for a bike ride along the Mekong at midday, with plans to visit the river front playground. For lunch we found a fruit shack that made amazing smoothies: Mango-lemon-mint, Pineapple-apple-melon, and banana-based mixtures delighted us all. Back to the hotel we rode, weaving in and out of the cars, tuk-tuks, and other bicyclists on Thanon Setthathirat. Phineas and Eilir played for almost 2 hours in the bathtub with their octonaut toys, dreaming up entire new species of fish that were in danger and needed rescue, emerging as wrinkled as raisins. In the evening, we had the most enchanting set up in the garden: a cool tropical evening with a pink sunset over the river, balloons hanging above our white table-clothed table, and a three tiered pink birthday cake that made Eilir swoon with happiness. Although there were only the four of us, it was all that a fourth birthday should be: dreamy and sweet. 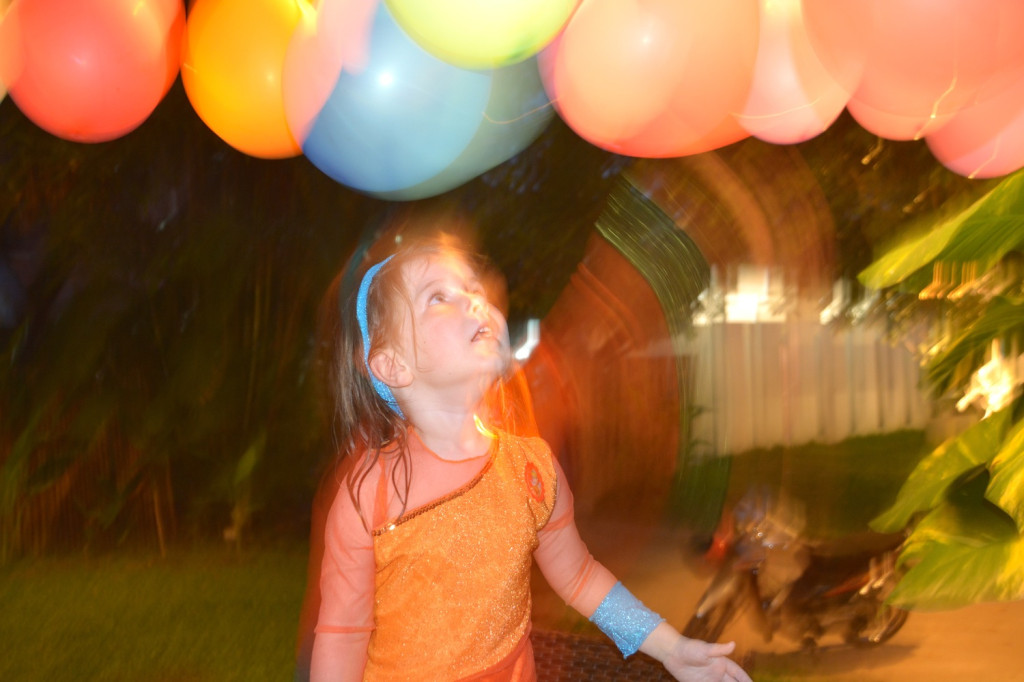 Mesmerized by the balloons

Special thanks to their superhero Aunt Monica, who relentlessly pursued justice battling the evil empire of Thai customs to deliver the best birthday presents ever. 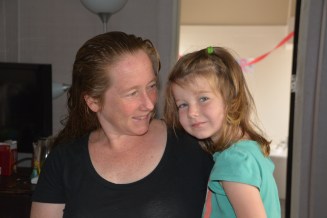 Our decorated bathroom: Eilir is 4!

Excitement at the morning presents

A sweet fairy and her woofa 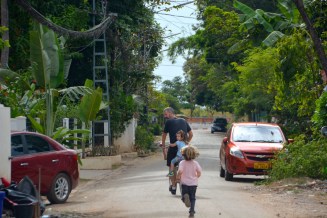 Cycling through Vientiane with Pappa.

An afternoon treat: Tom & Jerry on the iPad 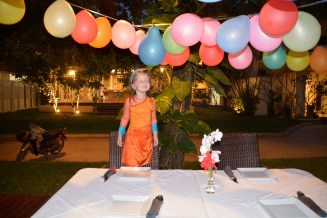 So happy she cannot sit 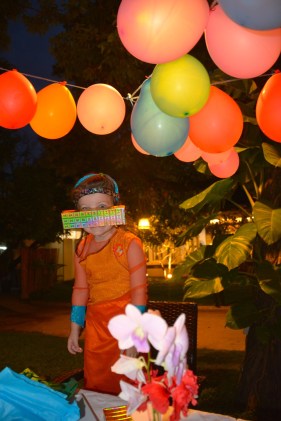 Waiting for the cake

Inspecting the cake. It’s missing the hearts, stars, and diamonds, but makes up for it with sugar crafted bunnies?!? Lost in translation, I guess.

Cannot hold back from picking out the cherries.

Our intimate party and happy kids

And my idol, the fairy of nature, Flora! Thanks Monica, Mike, Meghan, and Lexi 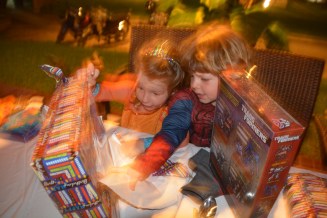 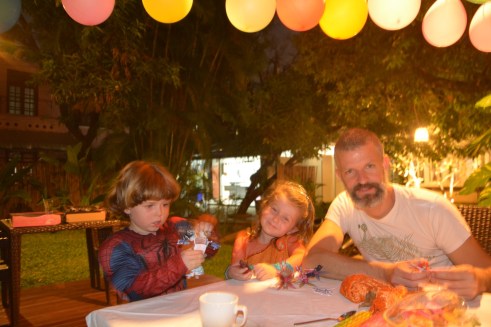 Transformers and Fairies, the perfect play pals
Tags: birthday, laos, travel with kids, vientiane
From: kids, travel
← Ever been in Vientiane?
Pedaling the Mekong: Luang Prabang →