Jeffrey’s Bay: My best birthday ever! 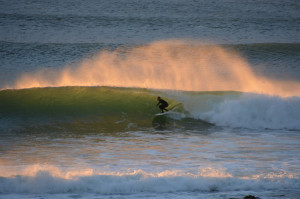 The original reason that I wanted to go to South Africa from the very first time Alexis and I started talking about doing a round-the-world trip some 10 years ago was to surf at Jeffrey’s Bay. It was a given that it was going to be part of this trip, and we managed to plan it to coincide with my 42nd birthday. Some background for non-surfers: Jeffrey’s Bay, or J-Bay, is generally considered to be one of the best surf spots on the planet. Every now and then one of the major surf publications create a list of the best surf spots in the world, and J-Bay is always in the top 10, if not in the top 5. One can get unusually long rides, up to 500 meters on the best days, going unusually fast. I had never been to J-Bay before, but I’ve been wanting to come here for more than 20 years. 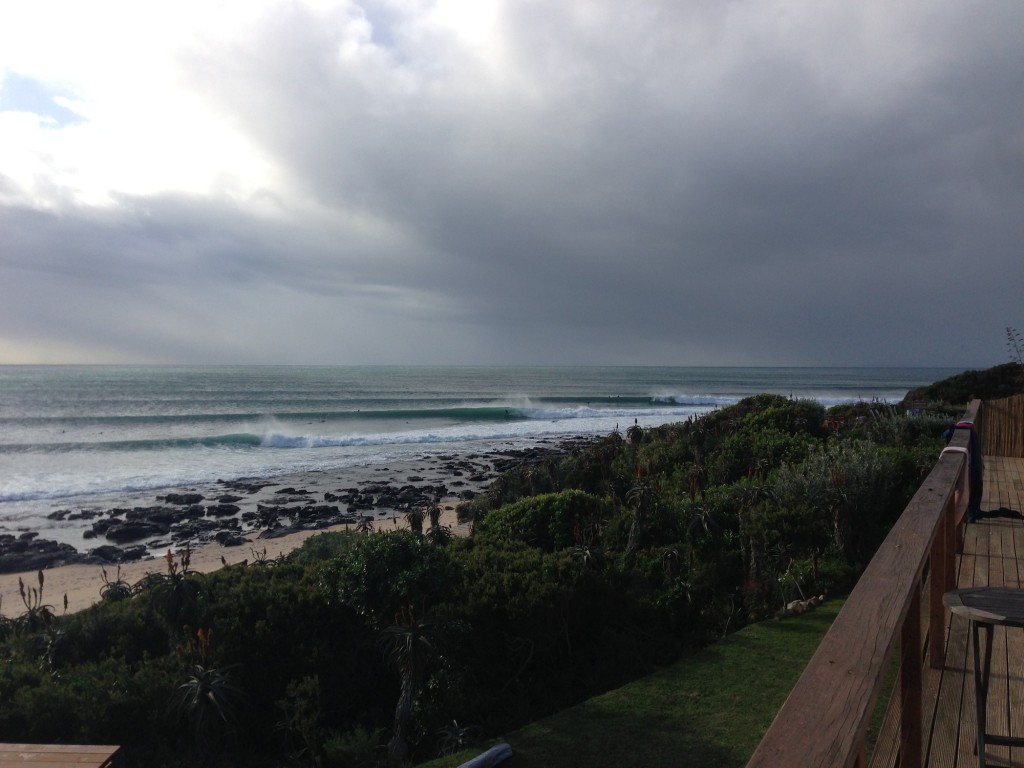 The view from our guest house at Jeffrey’s Bay

I had not surfed for a couple of months before the trip and I was pretty badly out of shape, so we tried to fit some practice surfs into our itinerary before J-Bay. I bought a surf board in Cape Town on the third day of the trip. I checked three of four surf shops before buying the board and tried to get some advice on what equipment is best for the type of waves at J-Bay. I got all sorts of random, conflicting advice and in the end I decided to go for a standard, generic 6’6” thruster by Clayton, a shaper from Durban. I surfed a few times in Muizenberg outside of Cape Town which was really good exercise: a lot of paddling and duck-diving but not a whole lot of actual surfing. (Muizenberg was allegedly the first place in South Africa where someone surfed back in the 1920s.) We had seen some great, barreling waves further south at Danger’s and St James reef in Kalk Bay but that was the day before I bought the surfboard when the swell was really big. In retrospect it was probably a good thing that I started out in the beach break at Muizenberg rather than some heavy-breaking, barreling, localized reef break.

A couple of days later, we made it up to Victoria’s Bay close to the boarder between Western Cape and Eastern Cape. Victoria’s Bay is a small bay with a right hand pointbreak at the western point. We stayed for three days at Land’s End right on the point, the closest I’ve ever stayed to a surf spot. Our bedroom was about 10 meters from the rock where one jumped into the water and about 20 meters from the take-off spot. Vic’s Bay was a fun wave albeit not in the same league as J-Bay. The wave starts with a bumpy, somewhat tricky take off close to some big rocks, followed by a couple of steeper sections before it got soft and mushy on the inside. One could get pretty long rides all the way to the sandy beach inside the bay but it was usually just the first 50 meters that were interesting. Most of the other surfers (there weren’t that many) were a small group of very nice and helpful locals. All in all, a very nice place to get an easy start to the surf part of our trip. 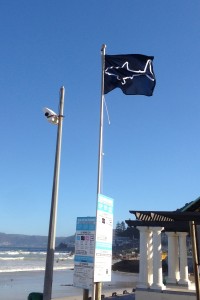 The topic of sharks is ever present in South Africa. We knew this before coming here but it was still not entirely comfortable. There are sharks in all oceans, and shark attacks happen in California too, but I haven’t been anywhere in the world where the topic of sharks is completely inseparable from any and all water sports. Any description of a surf spot, printed or verbal, includes an assessment of the risk of a shark attack. There are signs posted at almost every beach with advice: don’t surf at dusk; keep your eyes open for sharks; don’t surf near seal colonies; don’t strap slabs of raw beef to your surfboard before entering the water. I was pretty strict about following the rules for how to avoid being eaten.

We spent five days in J-Bay. We had one day of OK surf, 3 days of very good surf, and one day that was easily the best waves I’ve had in 4 or 5 years. It was absolutely amazing. A few feet overhead, off-shore wind, and long, ridiculously fast rides. I got a few small barrels, although not the long, deep, wide open barrels that I had been dreaming of. And it wasn’t even that crowded: we had the best surf on a Sunday and I never counted more than 25 people in the lineup. At Rincon it would have been 200 people. Even on the smaller days when it looked barely surfable, I got waves that would have been fantastic by any normal standard. It might look like it is too small and inconsistent, but if you are lucky to get on the right wave it can be 200 meters of going faster than you thought possible on a chest-high wave. 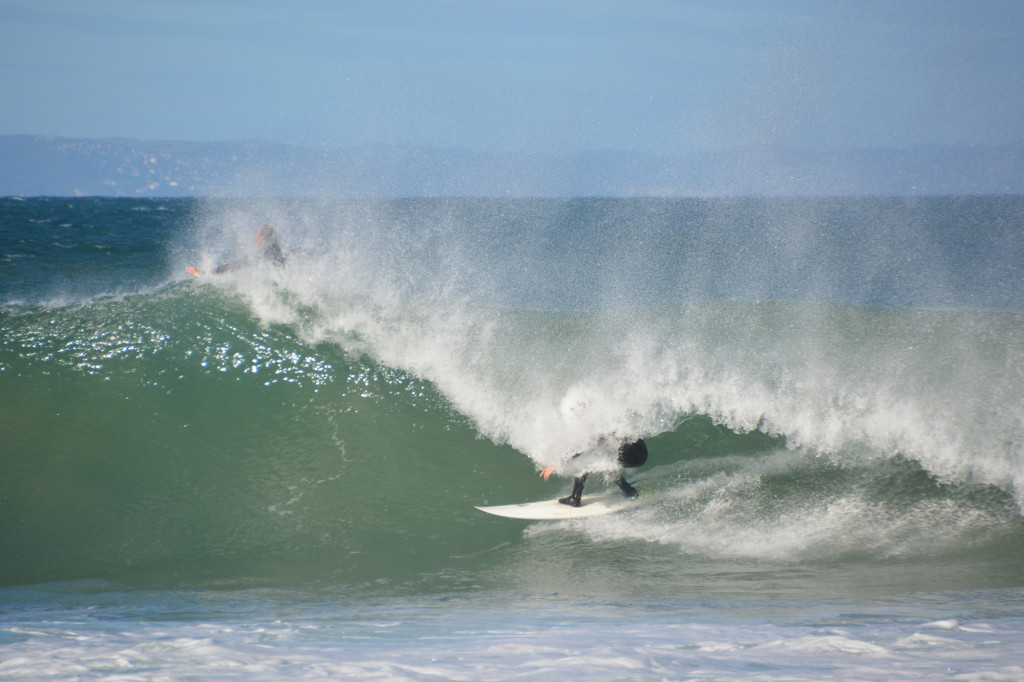 Staffan trying to negotiate both oncoming traffic and the falling lip

Since the stay at J-bay was my birthday present we had booked a very nice room at a place called African Perfection just a few steps from the beach with a view over the best part of the Bay called “Supertubes”. Every morning I got up at dawn, checked the surf from our balcony, put on my wetsuit, and paddled out. By the way, it is absolutely essential to stay on walking distance from the waves if you are on a surf trip with family, or with anyone that doesn’t surf. You don’t want to try to plan sessions in advance, share a car, or drive around looking for good waves together with non-surfers. It is easiest and most pleasant for everybody if you can just go out when it is good. J-bay is an incredibly easy surf destination. There are accommodations all along the point, plenty of inexpensive places to eat, enough surf shops for any equipment you might need, and a very friendly atmosphere. But I should say that it is not the most interesting place if you don’t surf. There is not much to do except surf. The restaurants are OK but not great (the coffee shop/bakery INFOOD being the only exception—we ate lunch there four days in a row). And it is not the most charming town I’ve ever seen. But all those things don’t matter if you come for the surf. After seeing J-Bay in countless movies, magazines, and listed on all those best-waves-in-the-world lists, it still lives up to all the hype. At least it did for me. The five days at J-Bay was most definitely my best birthday present ever. 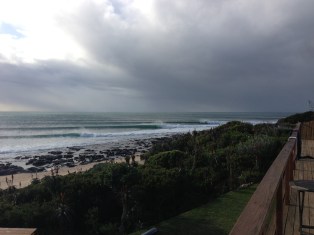 The view from our guest house at Jeffrey’s Bay

The place is quite scenic even for non-surfers 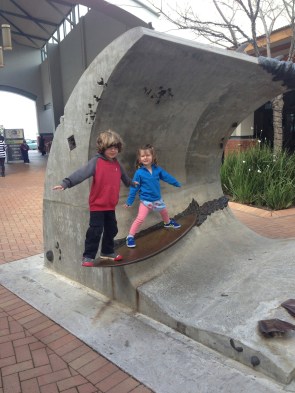 Pappa did not get the first Barrel at J-Bay

…and even a cutback

Staffan trying to negotiate both oncoming traffic and the falling lip 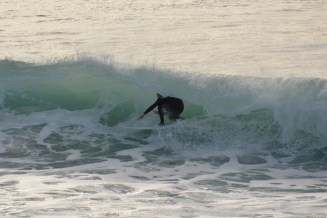 It is quite hollow even on smaller days 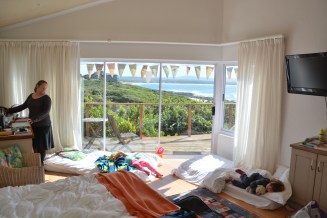 Our room at African Perfection, complete with birthday decorations for Pappa

Our guest house from the outside

These guys are substantially better surfers than humans 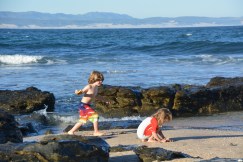 Phineas and Eilir playing on the beach 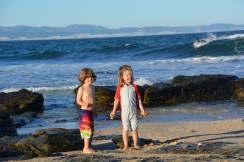 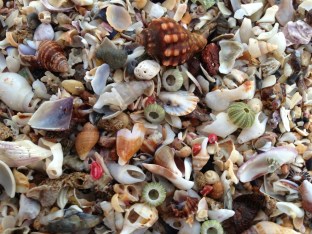 The only other attraction in J-Bay: collecting shells 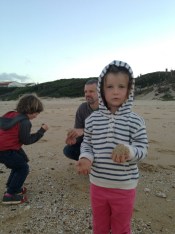 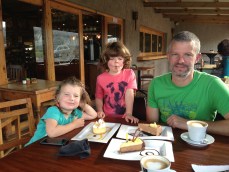 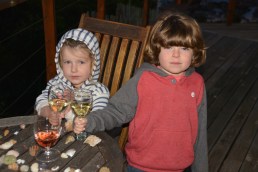